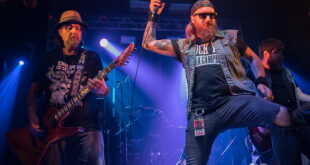 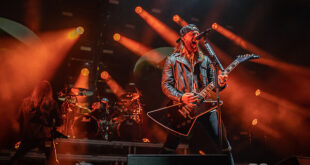 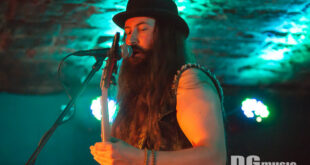 This is a Thursday night in Glasgow. This is the unofficial start to the weekend. This is The Quireboys. And this is rock and roll.

With the other C-word playing havoc with all live gatherings – apart from the Euros, and (naturally) political summits – Gypsy rock and rollers The Quireboys were forced to curtail plans to celebrate the 30th anniversary of their seminal album ‘A Little Bit Of What You Fancy’, and opt for the less glamorous “31st Anniversary” instead. 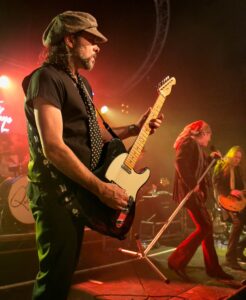 Fashion dictates that when an album is played in its entirety that it’s played from start to finish, in order, but The Quireboys mix it up which means that rather than the crowd knowing in advance what song follows on from each other, they don’t know quite know what to expect. Opening with the ‘Peter Gunn’-Esque riffs of ‘I Love This Dirty Town’ (from 2008’s ‘Homewreckers & Heartbreakers’) – courtesy of the immaculate Guy Griffin – The Quireboys are playing like it’s their last night on earth and are determined to go out with a bang. As always, frontman Spike uses his mic stand as an extra limb and is constantly twirling and shimmying across the stage making eye contact with each and every one of the audience, or at least it seems like he is. One of the most entertaining and experienced frontmen still treading the boards, Spike does make it look easy, and when he talks to those assembled in front of him, it’s like having a laugh over a beer (or a brandy) with one of your mates. He jokes about the 30th anniversary now being the 31st, as well as joking about what night it is…” Who’s drinking tonight? It’s Saturday night…isn’t it?”, but with Spike onstage, every night is Saturday night. 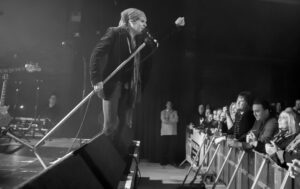 ‘Misled’ is the first stop-off at ‘A Little Bit Of What You Fancy’, and glasses are raised in appreciation of its arrival, but that’s nothing compared to the early airing of ‘Hey You’ which still has that ability to unite the entire audience who might all be singing it for different reasons, but when they sing it together it is magical. ‘There She Goes Again’ quickly follows on for a raucous one-two which ends with Spike going for a dramatic jump just as the song ends, but he has a short bout of premature ejection and misses, joking…” I jumped too early…”. Even 31 years on, ‘I Don’t Love You Anymore’ still has one of the best swells in music, and when it does kick in, by Christ it is massive – one of the standout moments of the evening, and shows that a band famous for its party anthems can still surprise an audience and leave them breathless. Party anthems are, however, what The Quireboys are known for, and with ‘7 O’Clock’ they have a genuine classic, or as Spike introduces it…” One of the best drinking songs in the world…what time is it?…”, and once the piano intro kicks in – chaos ensues. 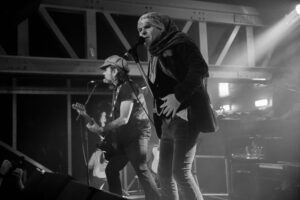 With it being a very early curfew, the encore begins at the time a headliner normally comes on, but what an encore it was. ‘Mona Lisa Smiled’ has arms in the air swaying side to side, ‘Original Black Eyed Son’ begins with a joke about the album that it’s lifted from mistakingly being called ‘Amazing Grace’ – which leads to Spike leading the crowd in a rabble-rousing version of the famous hymn but with the words changed to “amazing dis-grace”. ‘This Is Rock ‘n’ Roll’ has pint glasses raised in salute, and ending on what else but ‘Sex Party’, the house lights are on and the crowd is heading towards the exit all before the clock strikes 10pm. Regardless of the semantics involved with what birthday the band is actually celebrating, The Quireboys put on an almighty show where the biggest surprise is that some people are actually surprised by how good a live-act Spike and company still are. With these guys, it’s in the blood. This is what they do, and in this kind of form…they are untouchable.

After a run as special guests of The Dead Daisies, The Quireboys restart their headline tour in Leeds on November 18th, all tour dates can be found below, with ticketing information available here.