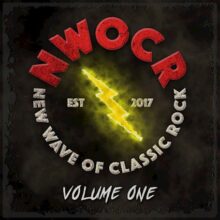 How many times have you heard the phrase “you know that you are doing something right, when they start attacking you”? Or words similar to that effect? In a sense it’s a compliment of sorts because it means that those on the receiving end are being noticed for being good at what they do: be it sports, the arts, politicians, or in the case of those behind the popular Facebook group ‘New Wave Of Classic Rock’ – daring to take on the establishment. A bit harsh? Nah, read these words in the review/hatchet job by Classic Rock’s Geoff Barton and tell me that he doesn’t have a problem with a bunch of like-minded friends setting up a Facebook group to promote new rock acts around the world and give them a platform to push their wares – “…the latest so-called ground-breaking musical phenomenon is (peal of trumpets ahoy) the New Wave Of Classic Rock – or NWOCR for short shorts.” It’s the sarcastic use of “so-called” and “ground-breaking” that perhaps irks the most in that sentence. Has anyone from NWOCR actually referred to themselves as a “ground-breaking musical phenomenon”? The entire review from Barton stinks of sour grapes from someone who seems out to teach those young ‘uns a lesson or two. In doing so, Barton not only comes across as a grumpy old man – which is ironic because when he coined the term NWOBHM back in the day he must have met the same kind of ridicule from older music fans – but he has succeeded in giving this album heaps of publicity meaning a few extra sales, which might have been his clever plan all along? But then again, during the glory days of Sounds Magazine and Kerrang, he was nicknamed “Deaf Barton” for a reason. 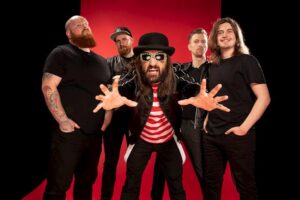 Anyway, enough about Barton, what about the music on offer? For £15.00 of your hard-earned cash, you get 42 tracks from bands who have been around for less than ten years. 43 if you count the hidden track that ends the collection. So that works out about 35p per track, which is incredible value for money considering that in 2021 a Freddo bar is 25p. A lot of bang for your buck. Amongst those 42 tracks, you will find a great deal of variety, enough to make you screw your eyes up and utter “eh?” rather loudly at the part in Barton’s review where he quotes someone as saying “Everything sounds the same, doesn’t it”. It. Doesn’t. Sound. The. Same. Capiche? In amongst the first 11 tracks, you will find: Massive Wagons with both middle fingers raised to the powers-that-be on ‘Tokyo’, a rip-roaring Slade-inspired glam-tastic few minutes that perfectly set the scene, modern rock from Mason Hill (‘D.N.A.’), a riff-laden gem from groove-merchants These Wicked Rivers (‘Shine On’), some mature and muscular riffage from ‘Empyre’ (‘New Republic’), gnarly Southern rock-meets-AC/DC from Sons Of Liberty (‘Fire And Gasoline’), a gorgeous slice of Susanna Hoffs-inspired power-pop from The Hot Damn (‘Dance Around’), a real peacock-like strut from Everyday Heroes (‘Find My Way’), and a smoking hot slice of soulful West Coast Americana from Elles Bailey (‘Woman Like Me’) complete with a killer organ sound and sizzling slide guitar. “Everything sounds the same”. Really? Add the slow-burning, big-ass mountainous grooves of Wolf Jaw (‘I Ain’t Ready’), and the good time rock & roll from The New Roses (‘Whiskey Nightmare’), and you have more variety than you can shake a shitty stick at. 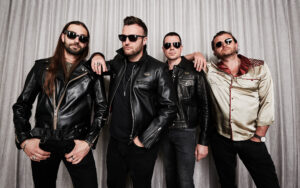 Disc two continues in much the same way: varied. Phil Campbell And The Bastard Sons get a bit heavy (‘Son Of A Gun’) and the man himself reminds everyone that he is Mr. Phil Campbell for a reason. Like Massive Wagons, and Mason Hill, The Dust Coda broke into the National album charts with their latest album, and it’s easy to see why, ‘When The Tide Comes In’ showcases a band with a “certain something”, a little bit of a bluesy shuffle here and there, vocals that drag the listener in, and a track that hangs around for days afterward. SKAM keeps it feisty on one of the more NWOBHM-inspired moments on the album (‘Iron Cross’), and if commercial rock in a Bon Jovi vein is your bag, then fear not as here comes Collateral (‘Merry Go Round’). The catchy-as-hell pedal to the metal approach from Thundermother (‘Driving In Style’) is bookended by more of an Alice In Chains-ish sound from Gorilla Riot (‘Still Doing Time’) and King Creature (‘Captives’), and along with the alt-rock leanings of Rews (‘Today We’re Warriors’), the tongue-in-cheek country metal from Bootyard Bandits (‘Hoedown Showdown’), the gothic Alice Cooper/Rob Zombie schlock horror from Ward XVI (‘Broken Toys’), and the soaring closing track from Blackwater Conspiracy (‘Soul Revolutionaries’), disc two will have you reaching for that shitty stick again to give it another ruddy good shake.

Reviews are just one person’s opinion, and it would be very boring if everyone agreed with each other, but in the case of Barton’s review, it actually comes across as a personal attack from him. There is plenty on ‘The Official New Wave Of Classic Rock – Volume 1’ compilation CD to shout about in a positive manner, the blossoming global rock scene is in good hands with acts like these, and if none of them go on to be more household names like Iron Maiden did with the NWOBHM movement, then that’s okay, for they have already contributed way more to keeping the spirit of rock alive than the “rock is dead” naysayers. Geoff, honey, we are not angry at you, we are just disappointed.

There will be bands on this collection that you might just be hearing for the first time, in our case it was Shape Of Water, damn, where have they been hiding!