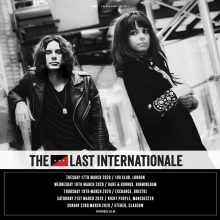 Upon listening to ‘Soul On Fire’ for the first time, the listener might be inclined to turn to no-one in particular and give a Winston Wolfe-style “mmmm” and raise an imaginary cup of coffee. Make no mistake, this is the good shit. Fresh from opening for The Cult on their Sonic Temple 30th anniversary tour, The Last Internationale carried the momentum over by jumping on another sold out tour, this time criss-crossing Europe with Rival Sons. The perfect time to release their sophomore studio album then.

Although both drink from the same well, The Cult and Rival Sons are polar opposites, and The Last Internationale fit perfectly right in the middle. Fans of the fuzzlord himself Scott Holiday? Then try on some of the riffs from The Last Internationale’s Edgey Pires for size. The guitar fireworks from Pires are incredible, especially during the climax of ‘Hard Times’ when he launches into a maelstrom of Morello-sized riffs as vocalist/bassist Delila Paz repeats the words “rise up” over a historical radio broadcast. Then there is ‘Tempest Blues’ which kicks like a pissed-up mule. Man he certainly makes that slide guitar talk. Or marvel at the freeform fade out during ‘Freak Revolution’…fill yer boots basically.

Genres fuse together as the pair take the listener on a magic carpet ride through a trippy, bluesy, soulful, dynamite-packed, warm and fuzzy forty minutes or so. ‘Mind Ain’t Free’ is insanely catchy with a joyous gospel-like conclusion, while ‘Try Me’ is kooky and uber-modern, both come complete with a killer bass groove from Paz that rattles the brain loose. Then there is one of the many highlights on the album – the epic title-track. Beginning with a simple, gorgeous piano fill and impassioned vocals from Paz, it grows into a towering moment that has high-class TV advert written right across it. Although it features name-checks to many classic performers (Jimi, Janis, Nina…), once the chorus kicks in, it’s easy to imagine someone like Keira Knightley running across a cobblestone courtyard as some French speaking voiceover artist blurts out a random snappy strapline for one of the big hitting perfume houses. You can pay me my 10% fee for suggesting it in donuts by the way.

‘Modern Man’ keeps up the pace with a stunning, shimmering guitar tone, while the pair then slow it back down on the atmospheric effect-laden ‘God Is a Sound’. The latter features a gradual build up which although you know is on the way, it’s still thrilling when it lands. Grow up in a house with Jefferson Airplane playing on a constant loop? Get flashbacks everytime ‘White Rabbit’ surfaces on a soundtrack? Then ‘Hit ‘Em With Your Blues’ will blow you away. Grace Slick-like vocals with a hint of Debbie Harry, and that’s about the only comparison that I can come up with when mentioning Delila Paz.

Ending on the pounding, sludgy ‘5th World’, ‘Soul On Fire’ is the kind of album that makes you wish you had moved your arse a bit quicker and got a ticket for Rival Sons before the gig sold out. Never mind though, The Last Internationale are back in March 2020 – huzzah!

All tour dates can be found here.