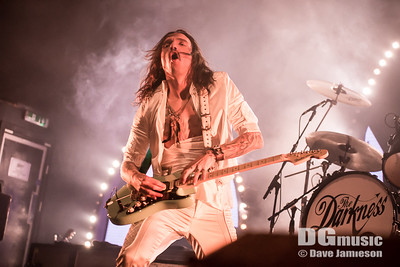 A celebration of Easter? In December? This can only mean one thing, The Darkness are back on the road, and they are not following the rules. Playing an album in its entirety from start to finish is usually reserved for legacy albums, very rarely a brand new album. But The Darkness care not a jot about the rulebook, and after having produced their best album in years, ‘Easter Is Cancelled’ (complete with a cover made to ruffle a few feathers), they are playing the sucker in full, from start to finish. Fear not though as the second half of the show features the band shitting out solid gold for 50 minutes of so. 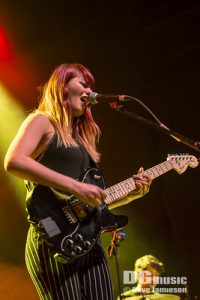 Special guests on the extensive run are Rews, the brainchild of Norn Iron singer/songwriter/guitarist (you name it, she can do it) Shauna Tohill. Joining Shauna on the tour are Ele Lucas on bass and Scott on drums, and the noise that the trio make can only be described as beautiful.

New single ‘Birdsong’ features a darker, grungier tone, but with lashings of the same ultra-catchy melodies that made Rews stand out on their arrival with debut album ‘Pyro’ in 2017. The sudden change in tone halfway through the song is a real thrill, especially with Ele unleashing some crushing bass licks. 2018’s ‘Can You Feel It’ shows another side to Tohill’s writing, all light and airy to begin with, then the throttle is released and the chorus kicks in. The only question left unanswered is why Paramount don’t have Tohill on speed dial to get this track onto the soundtrack for Fast & Furious 13, or whatever number they are on.

Catch Rews on their own headlining tour in March 2020, and look out for album number two, on the strength of ‘Birdsong’ alone it should be something very special indeed. 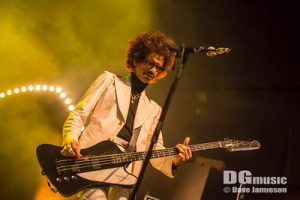 So, ‘Easter Is Cancelled’ then, in full, from start to finish, played by our four heroes, all dressed in white. Bloody hell that’s a bit risky isn’t it? None of the usual new-song-to-begin-with-then-something-familiar-then-another-new-song (repeat ad nauseam), nope it’s straight into the rather lovely early-Queen vibes of opener ‘Rock and Roll Deserves To Die’ followed by the feel-good strains of ‘How Can I Lose Your Love’. Justin Hawkins pauses to fill the boisterous audience in on what to expect with both sets, and yeah, they seem up for it. Perhaps it’s because ‘Easter Is Cancelled’ is such a strong album that no-one seems to mind, so ‘Live ‘Til I Die’ has them bouncing, ‘Heart Explodes’ has them swaying side-to-side, and the title-track followed by ‘Heavy Metal Lover’ has them headbanging. Once the last acoustic strains of ‘We Are The Guitar Men’ fade out, the stage fades to black and the atmosphere ramps up a notch or two. 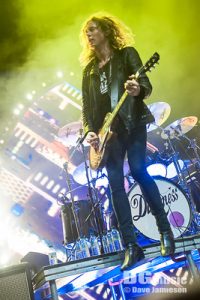 The lights come back on, the white suits are off, and bassist Frankie Poullain is the sole figure onstage, and he’s holding a cowbell, which can mean only one thing….we are on a one way ticket to hell and back! Sweet baby Jesus I had forgotten how insanely catchy this one is. Pint pots are arcing through the air, Santa hats go flying upwards and the lungs are getting a right proper workout. Just a quick sidebar here – at most gigs it’s three songs and out for the photographers, but full marks to The Darkness for allowing the photographers back in to shoot the first three numbers of the second set. They clearly understand the appeal of a good pic – nice one fellas! 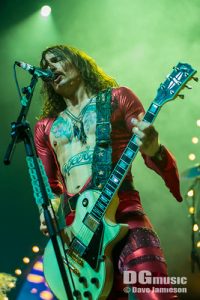 Back to the music, after ‘Barbarian’ has slayed the hordes, it’s a first visit to the debut album with the always delightful ‘Growing On Me’ as the volume levels increase. ‘Love Is Only A Feeling’ is as magical as ever, and how can anyone listen to ‘Solid Gold’ without grinning from ear-to-ear is a mystery to me. Justin Hawkins is on great form (as are the other band members), performing handstands on the drum riser, breaking out a few solo verses of ‘While My Guitar Gently Weeps’, but it’s his interaction with the crowd that wins the (solid) gold medal. During some call and response vocal gymnastics, he notices someone in the crowd doing “get on with it and wrap this up” hand gestures, Hawkins points the guy out and tells him “Don’t fucking try and move me on or I’ll jump in there, I’ll sign some shit and pose for some pictures…..then punch you in the fucking face!”…before quipping..“tonight is my night, you’re only here to join in…Merry Fucking Christmas!” Obliviously this was all done tongue-in-cheek, or was it?

As the night draws to an end everyone knows what comes next, the killer sing-a-long of ‘I Believe In A Thing Called Love’ followed with what else but ‘Christmas Time (Don’t Let The Bells End)’. The perfect end to what can only be described as a life affirming evening.

Mate of mine went to the Manchester gig a few days prior to this stop off in Glasgow, I messaged him asking how the gig was and his response best sums up The Darkness…“It’s The Darkness mate, you should know what to expect by now”. Yep, what keeps the fans coming back in droves each year is the fact that they know they will be entertained, they will see a “show” in every sense of the word. And tonight was no different, The Darkness have regained their place at the top table of British Rock.