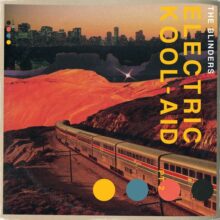 Having already released the EP’s ‘Electric Kool-Aid (Part I)’ and the cunningly titled follow-up ‘Electric Kool-Aid (Part II)’ to streaming platforms, Manchester-based outfit The Blinders are gearing up to release both EPs for the first time as one collection on vinyl. Nine tracks released months apart, coming together on one album to give the ever-growing fanbase a rather snazzy-looking vinyl to drool over.

With the vocals from Thomas Haywood swirling around during the trippy-as-hell short title track, ‘Part I’ eases the listener into the world of ‘Electric Kool-Aid’ atop a magic carpet. Originally a three-piece from Doncaster, The Blinders have grown both in numbers and in a musical sense since relocating to Manchester, and the end result is a sound far more expansive than earlier material. Haywood’s impassioned and gritty vocals are still very much at the heart of everything that The Blinders creates, as is his guitar playing. Discovering The Blinders for the first time, you would hazard a guess that the band was either from Manchester, Liverpool, or Yorkshire, as the material on offer is steeped in the musical history of each of these areas. The gloriously dreamy ‘Barefoot Across Your Water’ is Manchester-born and bred, the bass-driven grooves of ‘City We Call Love’ and the twist-and-turns of ‘The Writer’ is Yorkshire, while the majestical ‘Hate To See You Tortured’ is Liverpool through and through. Something about the gritty realism of these northern strongholds – and their keen ear for a melody – that makes them a fertile breeding ground for guitar-driven indie rock and roll. 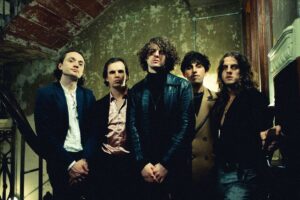 ‘Part II’ is more experimental, and way darker. Opener ‘Ritual Of The Crocodile Men’ has heaps going on during the four-minute running time, mainly fuelled by an impressive percussive sound, played at a throbbing pace with a few trippy, electronic fills thrown in to trick anyone thinking that they had The Blinders sussed – parts of it bordering on an industrial-vibe, and the vocal-free outro is to be relished. The Peter Hook-sized bass rumbles of ‘Just To See You’ are another highlight, and the track gets bigger and better with each listen. The pulsating ‘Fight For It’ mixes it up, again, the early spoken vocals from Thomas Haywood suggest that the track is going to go in one direction before some of the biggest hooks heard this year land and take the track in an entirely different direction. Destined to be a total banger when played in a live setting, ‘Fight For It’ just shades ‘Hate To See You Tortured’ as the standout moment of the album.

Ending on the spaced-out, psychedelic John Lennon-tinged ‘Acid Bath’, this is as varied an album as it gets. So much going on that you never really know what to expect next. And when was the last time you said that about an album?