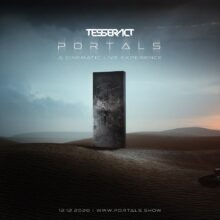 Imagine taking the twisted, maniacal, terrifying music of crazed Swedish metal monsters Meshuggah and turning it into something beautiful. I give you…TesseracT.

In 2021 we have begun to see a change in the way we see live video releases. Gone are the shots of ecstatic crowds undulating and moving like human waves to the pulse of the music. Gone is the interaction between artist and crowd, the coming together to form one unit during sing-a-longs. Gone. Is. The. Audience…

The Covid-19 Pandemic (even I am sick of writing about it in every goddamn article) has hit the arts to an almost irreversible extent and with show after show of cancellations, artists have had to get a bit creative. The livestreaming of shows from homes, studios, and empty venues has been the result with some opting to just play their songs in a studio setting, whilst others have offered something a little more visual to watch (Devin’s “Galactic Quarantine” release has him and his bandmates flying through space on separate stages)

And so to Portals, Tesseract’s attempt at a livestreamed show. Going into this I already knew the music was going to be superb. This is a band that is tight and sounds just like their records live. What we get is a panoramic cinematic experience. The band performs a set covering all four of their albums on a dark soundstage. Behind them stands a monolithic screen projecting various images equal parts ‘The Matrix’ and H.R. Giger. State-of-the-art lasers scan the stage with a thin blue mist reminiscent of the opening scene in ‘Aliens’. Singer Dan Tompkins vocals soar gracefully over technical down-tuned riffs and all I want to do is grab the volume knob and crank it right up. The sound quality is of the highest order and, along with the stunning light show and visuals, is begging for the finest home cinema set-up. Drummer Jay Postones is utterly thrilling to watch and his playing will certainly test your speakers. Tesseract aren’t known as a band with hits but there are some fan favourites on show here, notably “Concealing Fate Pt.2”: its breakdown riff doing for djent what “Spheres Of Madness” did for death metal. I was a little disappointed that “Survival” was notable in its absence, probably my favourite Tesseract number. As the show progresses we are treated to an array of lighting effects in a multitude of colours which goes hand in hand with the sci-fi-sounding music – the band could be performing on a spaceship!

All in all, this is a beautifully shot, crystal clear sounding experience. The good news is there is hope on the horizon and Tesseract have a handful of UK shows planned for November. These are sure to sell out fast so grab a ticket now!

“PORTALS” is released on double CD and Blu Ray on 27th August (via Kscope), for the best experience the Blu Ray is essential! (pre-order here)

Previous BEYOND THE BLACK: Sign with Nuclear Blast
Next Review: Singles Round-Up