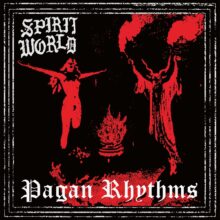 When Springsteen released his ‘Western Stars’ album in 2019, critics fell over each other to heap praise on what was deemed to be the ultimate love letter to Western imagery. Sweeping, cinematic, and character-driven, it conjured up a grandiose “range of American themes, of highways and desert spaces, of isolation and community and the permanence of home and hope”. On debut album ‘Pagan Rhythms’, SpiritWorld creator Stu Folsom explores similar themes but throws in a few twists and turns, and takes an altogether darker path. If Springsteen’s ‘Western Stars’ was widescreen 70mm John Ford, then, by comparison, Folsom’s ‘Pagan Rhythms’ is what would happen if Sam Peckinpah was alive and taking on a modern-day grime-filled Western movie with Nicolas Cage in full-on ‘Mandy’ gonzo mode in the lead role.

With a strong background in Las Vegas hardcore/punk, Folsom has taken the explosive nature of that scene and added some Slayer-like riffage to come up with what he refers to as “Death Western”. Like any self-respecting hardcore album, ‘Pagan Rhythms’ doesn’t hang around. Whilst still clocking in at just over 30 minutes in length, and packing in nine songs, it does come as a surprise that, with the exception of the short, sharp blow to the throat that is ‘The Bringer of Light’, each song nudges the three-minute mark, and in doing so, leaves a size-12 imprint with each stomp, kinda like that Vince Vaughn scene in ‘Brawl in Cell Block 99’. 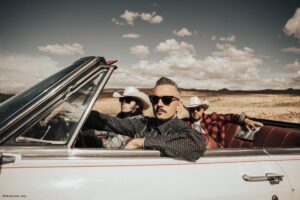 Folsom’s barking vocal style (backed by classic hardcore gang-vocals; especially on the title track) brings an air of menace to the party, and to an extent gives off an Al Jourgensen vibe here and there (in particular ‘Godless’ has an industrial thread running through itself) – that same kind of socially conscious “fuck the man” feeling. The buzzsaw riffs from Matt Schrum are intense and seem as if they were conceived south of heaven at some sort of Death Metal version of the fabled crossroads of Highways 49 and 61 in Clarksdale, Mississippi. The drum work? Other-worldy. Credited to both Thomas Pridgen (The Mars Volta/Trash Talk) and ex-Apiary skinsman Adam Elliot, the playing is at times dizzying, especially the insane blast beats of ‘Unholy Passages’ which provide one of the standout moments on an album full of highlights. The short groove-metal breakdown on the same track comes out of the left field and when Folsom comes back in with his paint-stripping Drill Sergeant vocals it is genuinely hair-raising. Just about enough time to pick yourself up from the floor before the poleaxing ‘Night Terrors’ kicks the door in with its phenomenal level of anger. The larger-than-life hardcore gang-vocals are crucial to the song, whereas ‘The Demon Storm’ finds the vocals going down more of a traditional thrash route, same intensity though. ‘Armageddon Honkytonk & Saloon’ packs in enough aggression to keep every Slayer fan happy, as does ‘Comancheria’

According to the Irish Annals, in AD 690 “…it rained a shower of blood and a wolf was heard speaking with a human voice, which was horrific to all…”, what is less commonly known is that said wolf had been listening to ‘Pagan Rhythms’ and was simply saying…” fucking banging album, mate”.