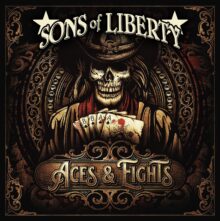 During the search for a new sound, or something “unique” (quotation marks on purpose as all music is influenced in some way by others) the mainstream music press often get blinkered and are quick to dismiss some bands as “not offering anything new”. How many times have you clicked on a YouTube video from that week’s “freshest, most unique” band and come away thinking of The Fast Show’s Jazz Club piss-take? It seems that the ability to connect with an audience by playing well-constructed, memorable rock music is often overlooked in favour of some hipster Indie-Metal-Jazz fusion outfit playing world music with hip-hop overtones. Niiiice. As we all know, fads are just that – a fad, and short-lived. That ability to connect mentioned earlier though is crucial. Enter Sons of Liberty from the deep southwest of the UK with their own brand of Southern-influenced hard rock which is best described as “timeless”.

Sophomore effort ‘Aces & Eights’ is 12 tracks of guitar-driven rock music guaranteed to cure you of whatever ails ‘ya (crank up ‘Lights Are On’ and drool over those guitar licks). It’s fun, it’s easily relatable, and above all: it kicks like a mule with an elastic band around its knackers. Looking to escape reality and in need of a good time? Then c’mon in and kick up some dust. Looking for something a tad hipper? Then there is always Pitchfork, or Coachella will be back sometime soon. In the meantime, allow Sons of Liberty to introduce you to ex-Black Oak Arkansas backing singer Ruby Starr on the titular opening track and sit back and marvel at this snarling beast of an opener. Thick bass licks from Mark Thomas will have the fillings in your mouth rattling free, and along with Steve Byrne on drums – Sons of Liberty have a mighty fine rhythm section in much the same way that AC/DC have Williams and Rudd. Nothing fancy, just the basics done really, really well. ‘Ruby Starr’ is a killer way to open the album, and along with a hint of BOA, you might just pick up a smidgeon of a Montrose sound via the excellent twin guitar attack of Fred Hale & Andy ‘Moose’ Muse. 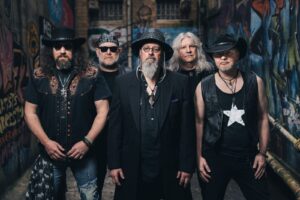 In 2021 the term Southern-influenced can often suggest a Black Stone Cherry-ish vibe, as well as copious amounts of the trademark BSC chugging train-like guitars…neither are to be found here. With the warm, grizzled vocals of Rob Cooksley front and centre (thanks to the nailed-on production from Josiah J Manning), Sons of Liberty whisk the listener back in time to when Black Stone Cherry were still swimming and US acts such as the aforementioned Black Oak Arkansas, Grand Funk Railroad, and later on, Molly Hatchet, and Blackfoot were strutting their collective stuff (the impressive ‘Texas Hill Country’ and ‘Doc’s Remedy’ in particular bear a suggestion of an influence of the two latter acts). ‘Don’t Hide Behind Your Weakness’ is primo 70s American rock and it’s easy to imagine Sons of Liberty impressing the locals with this at the legendary California Jam festival back in the day, ‘Beef Jerky Boogie’ would have had them grooving in their Daisy Dukes as the Allman-esque guitar licks filled the weed-drenched air. ‘Damaged Reputation’ is more urgent and modern sounding, with fantastic authentic vocals from Cooksley and a real, vibrant swing to the music. Include the incendiary guitar solos and this one should have the heads bobbing in unison once normal live gigs return.

For all the flashes of an American influence, there are also hints of other influences, none more so than ‘Fire & Gasoline’ which with its fantastic rhythm guitar tones, and stellar vocals, tips its hat to classic AC/DC. This particular little gem lands in the latter stages of the album, where the guitar-drenched ballad ‘I Come In Peace’ (great vocal hooks on this one), the Aerosmith shuffle of ‘Dead Man’s Hand’, a sizzling guitar-filled ode to those that dance to the beat of their own drum – ‘Lights Are On’, and bluesy closing track ‘Whiskey Is My Vaccine’, all help ensure that the quality on offer never dips, and the end result is an album that is something very special indeed.

During the in-out-in-out hokey cokey of Covid regulations and live gigs, Sons of Liberty are due to play live gigs in July, with their backs to an audience a mile away at picnic tables, an audience unable to stand up, dance, applaud, or speak above a whisper. All live dates can be found above. If they do actually go ahead, support your local venue and buy a ticket…after all, this isn’t Royal Ascot.