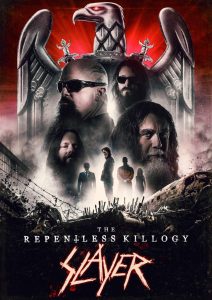 The music video/concert movie has certainly evolved since Michael Jackson turned into a “zombie” and lined up for some pretty cheesy dance moves. Often released as a standalone video (video singles anyone?…Nope?), it gave artists the chance to expand their horizons and get in front of the camera for something other than a standard three minute foot-on-the-monitor-lip-synching effort. Fast forward to the digital streaming age and we have “cinema events”, where you can catch your favourite band beamed into your local fleapit for “one-night only”. The latest of which is the retina-blitzing, all out assault on the senses, movie/live concert from Slayer – ‘The Repentless Killology’.

The opening forty minutes or so feature the three previously released videos for ‘You Against You’, ‘Repentless’ and ‘Pride in Prejudice’, mixed in with various footage to continue the story. ‘Machete’ himself – Danny Trejo, provides the intro voiceover and adds a certain menace that only he can. Watch out for him later on, gouging eyes out in a prison riot scene..”pass the Old El Paso? No problems Danny, here..take mine as well”. All hell breaks loose and the protagonist of the piece embarks on the ultimate revenge mission. Blood explodes onto the screen, with each kill more gruesome; the knife to the meat and two veg – ouch, the decapitation later on – hilarious. It plays out like a low-budget ‘Kill Bill’ with a Robert Rodriguez grindhouse vibe, but ultimately, it’s a companion piece to a live concert. Perhaps that is the point that critics have missed, it’s not Scorsese, it’s not even S. Craig Zahler of ‘Dragged Across Concrete’ fame. It’s Slayer, in a fucking prison, so get over yourself and leave the poncey critiques to Mark Kermode.

After the blood splatter dissipates and the end credits fade out, it’s on with the star of the show – Slayer captured live at The Forum in Inglewood, California. The lights dim and the strains of ‘Delusions of Saviour’ kickstart a light show made up of giant white crosses projected onto a massive curtain, this in turn acts as a green light for thousands of cellphones to light up the arena. Once the massive Slayer logos stop spinning, the curtain drops and Slayer launch into ‘Repentless’. Somewhat surprisingly, the camerawork is pretty steady and and doesn’t resort to the fit-inducing standards that seem to be de rigueur today. ‘Antichrist’ introduces some pyro, but it’s the four guys onstage that provide most of the fireworks. Tom Araya and Kerry King are still the coolest dudes in Metal, and here they look like they have just stepped down from Mount Rushmore. The live gig also serves to remind everyone that Paul Bostaph and Gary Holt are more than bit-players, Holt especially thrills with his playing, and constantly looks like the proverbial kid in a candy store.

This is Slayer remember, so there is no drop in pace, or ferocity. No pause after the first few songs, instead it’s full steam ahead until Araya stops to soak up the atmosphere and welcome the crowd to “The fabulous Forum”. There’s a fantastic shot of Araya filmed from behind, with what seems like the entire arena lit up in front of him. He jokes with the crowd that “This is where you get off the ride, if you need to get off the ride”…before screaming…”WAAAAAR ENSEMBLE!” and all hell breaks loose. ‘Dead Skin Mask’ is introduced by Araya stating that “It’s time to do a love song for you!”, and once the sinister riffs fade out, the crowd take over.

It’s a full-on ninety minutes of thrash metal with the last thirty or so featuring some of the most iconic moments in Slayer history. ‘Seasons In The Abyss’, ‘South Of Heaven’, ‘Raining Blood’…’Angel Of Death’, sort of just roll off the tongue don’t they? It’s quite a humble Araya that thanks the crowd as the lights come up, thankful that so many people came out for the show. And it’s these final few moments that linger on the longest, not so much the pre-gig movie, okay, the decapitation scene is alone worthy of wearing out the rewind button, but essentially it’s the human side of Araya that resonates the most.