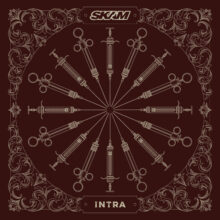 Leicester-based trio SKAM have been proving for a while now that three is indeed the magic number. For the sake of comparison, SKAM are more of a power-trio in a Budgie sense, rather than, say for instance Cream. The partnership of Steve Hill (guitar/vocals), his brother Neal Hill (drums/backing vocals), and Matt Gilmore (bass/backing vocals) have been melting faces for some time now, and slowly building up a loyal fanbase thanks to their powerful live shows and solid studio releases. Following on from 2017’s well-received concept album ‘The Amazing Memoirs of Geoffrey Goddard’, ‘Intra’ is the first EP of a 2-part anthology that will make up the 4th full-length release from the likeable chaps. Collectors should note that signed limited edition collectors pack CD available from the band themselves contains EP1 with a booklet and has space for EP2 (with booklet) that will be released at a later date. It’s called a limited edition for a reason, so don’t fanny about and get the order in now.

Consisting of six tracks, ‘Intra’ is the sound of a band who have been honing their craft on the road, in the rehearsal room, and with the lockdown in place: in Steve’s gaff. It’s also quite dark and deals with modern-day struggles, which given the state of the world at the minute is understandable. Opening track ‘Green Eyes’ (jealousy/envy, or as Shakespeare said in Othello; “green-eyed monster which doth mock..”) is a belter of an opening track. A Budgie ‘Breadfan’-ish guitar intro gives way to an uptempo, racy little number that features some stellar guitar work from Steve Hill, along with the trademark SKAM backing vocal harmonies from Neal Hill and Matt Gilmore. There’s a fantastic jam as the song ends, and as the song fades into ‘Wake Up’, it’s easy to imagine these two alongside each other in the live setting. Maybe even opening the show? 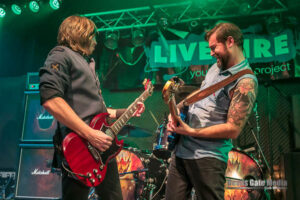 As mentioned earlier ‘Intra’ has a darker vibe, as best exemplified by ‘One Track Mind’. Dealing with a guy struggling with insomnia, and the thoughts in his head, the track has lashings of fiery guitar work (including some grungier tones to signify the sinister aspects) and also features a guest appearance from Paul Mahon, guitarist with The Answer. The duel guitar work between Hill and Mahon gives the track an extra dimension and brings with it some extra heft. While the two guitarists are being flash bastards, the backbone of the band are laying the bedrock for them to strut their stuff. Special mention to the promo video which features a creepy Steve Hill going full Ted Bundy mode (right down to the turtle neck sweater, and VW Beetle) while brother Neal goes for a wazz in the bushes and leaves his other half vulnerable, alone on a country path. He does come back though just as Steve is putting on his ski-mask ready to attack. Didn’t put sanitizer on your hands though after attending to a call of nature, did you, Neal?

Thanks to some muscular riffage ‘How Many Times’ is a perfect excuse to give the neck muscles a good workout, and if after a few beers you don’t break out the air-drums or slap-da-bass to ‘Fight The Fire’ then perhaps maybe it’s because you have no pulse or sense of rhythm. Or both? Either way, it’s a crunching three minutes or so cooked up by the band, especially around the 2.45 minute-mark which recalls the part of ‘Sweet Emotion’ where Aerosmith change pace and floor it. Closing track ‘On The Run’ brings a Scott Gorham/Robbo ‘Jailbreak’ era Thin Lizzy vibe to the party, as well as some rather lovely drum fills, and more of a grungier-feel to Steve Hill’s vocals.

Although ‘Intra’ showcases a darker aspect to the SKAM sound, the sing-a-long side to the band is never that far away, and there are plenty of moments to raise the glasses in unison once gigs return. The growth shown from the band is at times staggering, in particular, the vocals from Steve Hill really do shine. Part 2 is going to have to be something special indeed to top this.

‘Intra’ is available February 26th, order direct from the band here, by all means, stream the sucker, but also buy it from the band (some nice shirts there as well).

Previous ‘Renegades: Born In The Usa’ Featuring President Obama And Bruce Springsteen
Next The Middlenight Men: New Video – ‘We All Need Help Before Tomorrow’