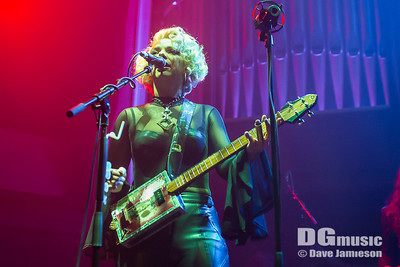 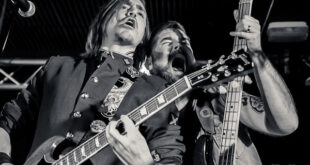 Making good on her promise to “be back real soon”, Samantha Fish has followed up her May 2019 jaunt around these shores, with another trek that takes in nine cities, ending in Brighton on Sunday March 8th. Why so soon you might ask? Well, current album; the rather special ‘Kill Or Be Kind’, was not available during last year’s run, therefore new tracks aired were quite light on the ground. Hence a speedy return with a barrel full of new tracks, as well as one new addition to the incredible band that plays alongside the Kansas City guitar slinger. 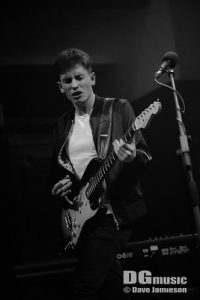 Special guest on this run of dates (which extends into mainland Europe during early mid March) is French blues-rock guitarist Félix Rabin. With the recent visit of Marcus King to these shores, Britain is being spoilt with an abundance of fresh, young blues-orientated guitarists. While King goes down more of a R&B/soul path, Rabin tends to stick with a brand of popular blues-rock. Quite similar to Dan Patlansky actually, in both look and feel, as well as the love of a battered Fender.

No stranger to these shores (having played HRH Blues last year) Rabin has thirty minutes to impress, and grasps the opportunity with both hands. Fronting a good old-fashioned power-trio, he peels off emotive and fiery guitar licks quite effortlessly, as well as possessing a warm, relaxing vocal style. He puts his pedal board to good use throughout the set, and is confident enough to throw in a Hendrix cover to break up material that most might be unfamiliar with. New EP ‘Pogboy’ is released in April, but anyone lucky enough to have secured a ticket for this tour can purchase it at the merch stand, also available on vinyl; which is rather nice.

With the ranks of their line-up increased with the addition of Nicholas David on keyboards and vocals, this fine bunch of musicians take to the stage with minimum fuss and start jamming an intro. With eyes straining to see through the darkness (so dark that David has to move his keyboards forward a foot or two before starting, just to make him visible), there is one noticeable absentee from the stage; Samantha Fish herself. The jam turns into a rather lush version of ‘Hole In The Bottom’, lifted from David’s ‘Yesterday’s Gone’ album – produced by Fish. As the song meanders on, it’s time for the guitar solo, and David introduces Samantha Fish to the stage; cue hysteria from the sold-out crowd. As far as gig intro’s go, this was something special, a sign of respect from the name on the marquee towards another band member. 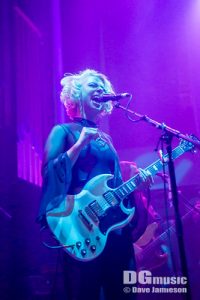 As previously mentioned, this tour comes hot on the heels of the last one because the new album is now firmly planted amongst the Fish faithful, of which there are plenty in attendance. Special mention to “Boogie”, a lifelong Samantha Fish fan who seems to be attending every gig on this run, look out for him at any Samantha Fish gig, he’s hard to miss as he’s usually dressed up for the occasion, tonight it was a long dayglo green wig, sparkly hat, sunglasses, and Michael Jackson trademark white gloves. Like I said; hard to miss him.

So, once ‘Hole In The Bottom’ fades out, it’s straight into the new album for ‘Bulletproof’ (a fantastic opening track, which has Fish using her cigar box guitar), quickly followed by the title track and a hellacious guitar solo, and a gorgeous, fuzzy version of ‘Watch It Die’. ‘Kill Or Be Kind’ is perhaps Fish’s most eclectic album, and one that strays from what you might expect a “traditional” blues album to sound like. ‘Love Letters’ and ‘She Don’t Live Around Here Anymore’ being two prime examples, and tonight they sound simply sublime. The album is played in its near entirety, so the audience is treated to the out-of-body experiences of ‘Dream Girl’ and ‘Fair-weather’, as well as the subtle slide guitar on ‘You Got It Bad’. It’s not often that you see a setlist as centred towards new material as this, although it’s a bold move which pays off.

When the band take a break from ‘Kill Or Be Kind’ it’s to back Nicholas David again on a gorgeous live version of ‘Say Goodbye’ (with Fish providing backing vocals whilst strumming an acoustic guitar) or to instigate a “bluesy mosh pit” on the always great fun ‘Little Baby’, and a shit-kicking run through of ‘Bitch On The Run’ which brings the night to an early conclusion.

With her most accessible album to date, Samantha Fish has staked her claim to be considered as more than a blues artist. Her playing is as incendiary as ever, she has one of the best bands around at the minute playing alongside her, and the upgrade in venues, coupled with sold-out signs, would suggest that her stock is in the ascendancy. It’s going to be interesting to see what she comes up with next.

Catch Samantha Fish on tour throughout the UK and Europe during March. All tour dates can be found here.