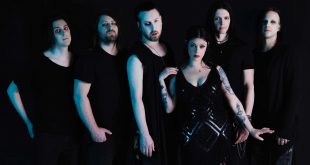 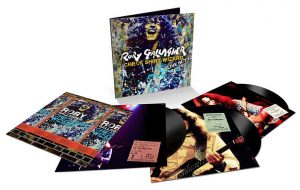 Urban legend has it that Jimi Hendrix was once asked “What’s it like to be the best rock guitarist in the world?” and he responded…“I don’t know, you’ll have to ask Rory Gallagher”. As far as urban legends- that you hope are more than just that- go, that’s right up there with looking into a mirror and saying “Candyman” five times. It’s a romantic notion that further cements the heartfelt appreciation of the softly spoken man from Cork who was arguably the most under-appreciated guitarist around.

Since his sad death in 1995, the legend has grown stronger and recent times brought the highly successful ‘Blues’ album, lovingly curated by Rory’s nephew – Daniel Gallagher (as is this glorious bundle). A sequel was always on the cards; and what a sequel it is. ‘Check Shirt Wizard – Live In ‘77’ is ‘Godfather II’. This 20-song, previously unreleased, set is culled from four shows (London, Brighton, Sheffield and Newcastle) during an early 1977 tour across the UK. Hold the stunning triple 180gram vinyl version in your hands and you are holding a piece of history. It’s almost a shame to open it…almost.

When you do break the seal, and drop the needle, you are greeted by chants of “Rory!…Rory!….Rory!” from a crowd packed into the Brighton Dome. The briefest of intros over with, the band saunter into a stunning rendition of ‘Do You Read Me’ quickly followed by the more urgent ‘Moonchild’, both tracks culled from Rory’s then latest album ‘Calling Card’. The keyboards from Lou Martin are pushed way up in the mix and are crucial to the feel of the album. The “new” tracks give way to an exemplary, shuffling ‘Bought And Sold’ and Gallagher let’s fly with some jaw-dropping licks. As underrated a guitarist as he was, Gallagher was also a fine vocalist. Close your eyes and It’s easy to imagine Gallagher onstage, battered Strat in hand, sweat dripping off his brow, as he delivers another soulful, authentic vocal performance.

After a monstrous jam brings ‘Walk On Hot Coals’ to an end, it’s time to turn the album over for a five song acoustic interlude that begins with a gritty version of ‘Out On The Western Plain’, followed by ‘Pistol Slapper Blues’ and a foot-stomping-hand-clapping ‘Barley & Grape Rag’; all recorded at Sheffield City Hall. The location changes to the Hammersmith Odeon for a beautiful version of ‘Too Much Alcohol’ before the rest of the band rejoin Gallagher for a spirited version of ‘Going To My Hometown’. This five track interlude, also known as Side D, highlights the variety in Gallagher’s playing, and the grit in his voice. This is perhaps the “side” that will see the most repeat plays.

Plugged back in for Side’s E and F; ‘Jack-Knife Beat’ becomes an eight-minute lesson in how to mix it up, ‘Souped-Up Ford’ and ‘Bullfrog Blues’ are thrilling, ‘Used To Be’ makes it all sound effortless, and the blistering solo’s from Gallagher on ‘Country Mile’ (coupled with boogie-woogie piano from Lou Martin) help bring this fine collection to a stunning end.

Rory Gallagher was a performer that came alive onstage, you just need to look at how many live albums he released, ‘Check Shirt Wizard – Live In ‘77’ is a worthy addition to the ranks that includes ‘Live! In Europe’, ‘Irish Tour ’74’ and ‘Stage Struck’. School of Rock needs to devote an entire semester to Gallagher, he’s that important.