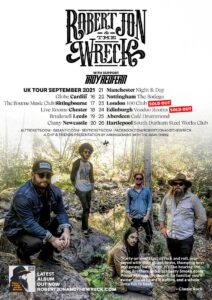 Striking while the iron is hot, Californian outfit Robert Jon & The Wreck return with a new studio album a mere 17 months after the release of their magnum opus ‘Last Light on the Highway’, and prove with ‘Shine A Light On Me Brother’ that we are indeed in the midst of one of the most productive eras of studio output since the ‘70s when releasing two albums in 17 months was seen to be somewhat lax.

The title track itself lights the blue touch paper and gets the album off to a fine start, it really is a perfect example of a group of accomplished musicians paying respect in their own way to the famed Stax brand of gospel-tinged southern and Memphis soul. Add some great musicianship: lively horns, vibrant backing vocals, and the incredible guitar-work of the Gibson SG-wielding Henry James, and you have the finest slice of good-time music this side of Jake and Elwood Blues. Look out for a slide guitar sound potent enough to impregnate all in its path, and pray that you get out of its way quick enough. As James Brown asked in The Blues Brothers movie, “…do you see the light?…”, well it appears that Robert Jon & The Wreck do indeed see the light. The kind of track that gives even those with two left feet the confidence to make a tit of themself on the dancefloor. 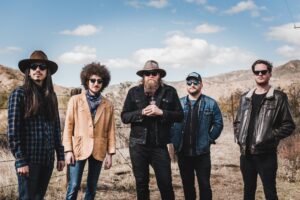 ‘Everyday’ is like manna from heaven for anyone with a hankering for some good-time music to drag them away from the current state of affairs in 2021; one of those tracks, where it’s impossible not to break out in a rash of smiles immediately upon hearing, and that gospel-like hand-clapping honky-tonk piano mid-section is that infectious it should come with a warning on the label. Thanks to a lovely, subtle performance from Steve Maggiora on the keyboards, and some beautiful ‘Badlands’-like guitar melodies, ‘Ain’t No Young Love Song’ has Robert Jon & The Wreck going down a Springsteen & The E Street Band-meets-Tom Petty & The Heartbreakers path, it’s easy to imagine this one being a cornerstone of the current live-set, and when Robert Jon Burrison sings…” This is the real thing…” it is pretty damn hard to disagree with the big fella. The horns on ‘Chicago’ are a nice addition in a gorgeous homage to one of the most important musical cities in America even today. The alright-alright-alright pacing works perfectly as the band is in no rush to get to their destination. The softer tones of ‘Hurricane’ quickly follow on and even though it is quite ballad-like, and played at a waltz pace, the track is pretty damn powerful. A real slow-burning gem of a track that oozes authenticity, and features a killer guitar solo that sounds like it was cooked up on the spot. The lighter-than-light vocals from Burrison demand attention from the listener, and the end result is a track that proves that you don’t need to be playing at 100mph to deliver a powerful punch. 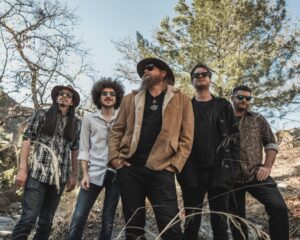 The more southern side of the band has been pretty inconspicuous so far, but that feeling quickly disappears during the latter stages of the album; first, with  ‘Desert Sun’ – so simple in its DNA makeup; a sliver of Skynyrd here, a dash of Blackberry Smoke there, and some Allman traits thrown in – and then later on with the majestic ‘Brother’ which is probably just edging it as the stand-out moment on the album, and the good-time album closer ‘Radio’ (try and not tap your feet on the latter – nope!). Constantly evolving, The Wreck mix it up again on the grungier, trippier strains of ‘Movin’’, flashbacks of Nirvana’s seminal ‘MTV Unplugged’ in places, although after a particularly psychedelic mid-section instrumental jam, the band appears to be more “plugged in” and the song rises a notch or two, and those female backing vocals towards the end…hair-raising! ‘Anna Maria’ continues to push the envelope with a Thin Lizzy-like intro, and as the song progresses with lyrics in a Phil Lynott-wordsmith way, it almost has a Celtic-feel to it, especially the harmonised vocals towards the end of the song. Throw a bodhrán into the mix and you could be in the Temple Bar on any night of the week.

Available now, pick up a copy at one of Robert Jon & The Wreck’s forthcoming UK shows, dates – here.