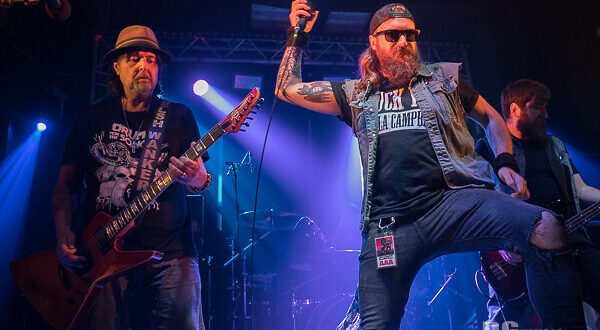 Whenever I shoot and review a gig I always try to catch all of the bands, so I was glad that I had left plenty of time to have a beer pre-gig having driven to Bristol and found the doors opened at 6.30! Thekla is a unique venue. A boat moored in the harbour in Bristol City Centre with a wrap-around balcony big enough for two people deep at max, “subdued” stage lighting, a superb sound mix at odds with what is essentially a steel box on water and a bar selling a decent range of beers but with almost no view of the stage due to that low balcony! 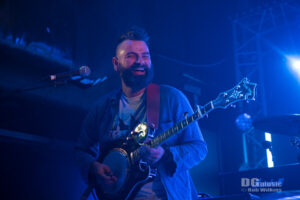 Sound checks ran late so it was pretty much doors open, unpack cameras and climb over a mass of guitar cases to reach the tiny photo pit for The Outlaw Orchestra. Few bands make me smile as much as these guys. Playing their “thrash/country”, “swamp/metal”, “western grunge” or “redneck rock” they have infectious chemistry together. The set mixes snippets of well-known songs with their own material and guitar/vocalist Dave’s hilarious banter. Beneath the fun is some fine musicians with Ryan Smith taking sole responsibility for the rhythm in style and “Banjo” Pete switching from banjo to lap steel and pedal steel throughout the set. Possibly a bit of a culture shock to a crowd anticipating the guitar-driven Florence Black and Mr. Campbell but I loved every second of their thoroughly entertaining set. 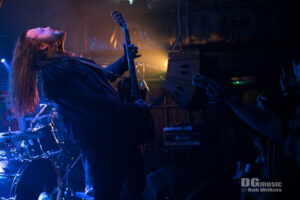 Momentum is everything after the long layoff we have all experienced and if a band has hit the ground running it is Florence Black. Debut album “Weight of the World” was unleashed to huge acclaim and their performance tonight shows that the songs translate to a live setting brilliantly. Tristan Thomas takes on both vocal and guitar duties and neglects neither. His gruff and powerful vocals compliment his huge, room-filling sound and when he steps back to solo not an eye in the room leaves his fretboard. The thing that really strikes me is the breadth of his soloing as not one song feels formulaic. The band isn’t just Tristan though and both Jordan Evans (bass) and Perry Davies (drums) add layer upon layer of power to the sound (and a HUGE shout out to whoever was twiddling the knobs as the sound was SUPERB!). “Sun and Moon” stood out for me. It is a stunningly mature piece of songwriting. The vocals are smoother and soulful to start, then the song builds and develops and the three showcase their talents beautifully. “Breadfan” closes their far too brief set and the reaction from the crowd is universally positive. Get to see them supporting Kris Barras in 2022 or when they start headlining because the Merthyr trio are going places rapidly and you will NOT want to get left behind. 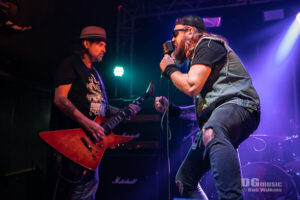 Another very short break and the reason for us all being here, Mr. Campbell and family, take to the stage to “Highway Star” and rip straight into “We’re the Bastards”.  I have seen the band with three vocalists, Neil Starr, Andrew Hunt and now Joel Peters takes to the stage with them and, for me, this is the best fit yet. Physically imposing, in-your-face stagecraft, great voice, and very much in the image of the rest of the band, he is an immediate hit in my eyes. 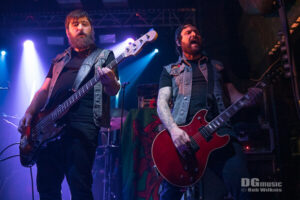 The set, as always, mixes Phil’s Motorhead heritage with original material to great effect. So much so that at times it is hard to tell the two apart as the set progresses. One thing I have noticed as the band has evolved is that the “Sons” are becoming more confident and a bigger part of the sound. Tyla (bass), Todd (guitar, including a few solos that give his Dad a run for his money), and Dane (drums) all making this far more than just a vehicle for the man himself to shine. Of course, though, it is that man that shines through. His intros to songs are soft-spoken but he lets his guitar do the talking and is the epitome of cool as he takes the band through their relatively short set.

“Born to Raise Hell” is dedicated by Joel to the sadly absent Tom Leighton of Wolfjaw, the original support band for the tour, and many an arm is raised aloft in his memory. “Get On Your Knees” sees the band involve the crowd in an extended and energetic battle of voices and of course “Ace of Spades” sees the place erupt. “Silver Machine” follows straight on and showcases Phil’s “dad dancing” skills as he bops along happily. The closing segment of “Going to Brazil”, “Dark Days”, “Big Mouth” and finally “Killed by Death” raises the temperature in the hull a good few degrees before the set comes to an end and us old rockers are ushered out past a queue of young students who clearly plan to be there till the early hours.