Nu Metal pioneers Papa Roach return with their first studio album in three years, and never ones to rest on their laurels (or past glories), the Californians continue the evolution of their sound by daring to rally against what is expected from them in their fourth decade as a band. 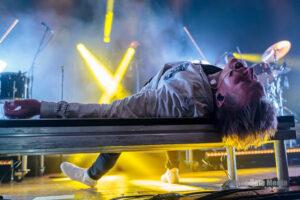 There has always been an experimental edge to their sound – melding rock and metal with rap and electronica – and this continues on studio album number eleven. Opener ‘Kill The Noise’ is an edgy few minutes that combines razor-sharp guitar work with thick basslines and soaring vocal hooks from Jacoby Shaddix. Hard-nosed in places, especially when the breakdown comes mid-song, a fantastic way to introduce Papa Roach 2022-style. ‘Stand Up’ quickly follows on and keeps the momentum going with what you might call a trademark Shaddix rapping performance over some thick electronic beats. Quite light and commercial in places (a rougher Imagine Dragons springs to mind), and ultra-heavy in others, it’s uber-modern. ‘Swerve (feat FEVER 333 & Sueco)’ brings the hip-hop influences of Papa Roach to the forefront and the track really shouldn’t come as a surprise to anyone who has followed the band these last few decades, although the freaky short sax solo might though. 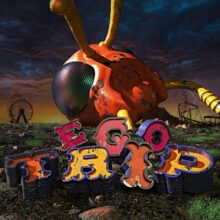 ‘Bloodline’ is a standout moment; stuttering vocals spat out by Shaddix, industrial metal tinges here and there, atmospheric arrangements at times, and most importantly at 02:26 minutes in length it doesn’t overstay its welcome. The title track is another highlight, a track that – thanks to some killer guitar riffs from Jerry Horton – constantly builds but instead of exploding to life, it takes a step backward and dials it down a notch. Fantastic bass sound from Tobin Esperance throughout. ‘Dying To Believe’ keeps the quality levels high, and the track has so much going on throughout its three minutes that it will make your head spin, and it’s easy to imagine this one totally slaying when played live. With a title like ‘Leave A Light On’, track ten of fourteen was always going to be a ballad, and with Shaddix singing in a lower register, the track has more of a stripped-back vibe, some subtle arrangements arrive towards the closing moments but essentially it is Papa Roach stripped to the bare bones.

‘Always Wandering’ is one of those genre-crossing moments that Papa Roach does so well, and as bizarre as it might sound, Spotify could slip this into a Harry Styles-inspired playlist, and fans of Mr. Styles would not bat an eyelid. And that is the appeal of Papa Roach in 2022, they refuse to adhere to what a “metal” band should sound like, instead, doing what they want and if the song is good enough, it goes on the album regardless of what genre people might want to lump it into. Still plenty of energy, and plenty of power – ‘Cut The Line’ and ‘I Surrender’ are total bangers in anyone’s songbook – ‘Ego Trip’ is quite a brave album that constantly surprises and one that proves that Papa Roach is still relevant twenty-two years after releasing the gazillion-selling ‘Infest’ album.