Review: Larkin Poe – ‘Self Made Man’ 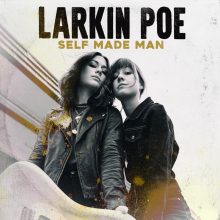 Grammy nominated duo Larkin Poe return with their fifth album ‘Self Made Man’, and the first thing of note is how instant the album is. No gentle easing in, as soon as the first few power chords of opening track ‘She’s A Self Made Man’ kick in, courtesy of Rebecca Lovell, the scene is set for thirty minutes or so of powerful rootsy, bluesy, rock & roll.

‘Holy Ghost Fire’ continues with more gorgeous guitar work from Rebecca and sister Megan with her lapsteel. The backing vocal harmonies are stunning, almost gospel-like in stature, and add another level to the track. Some of the little nuances make parts of ‘Self Made Man’ really pop out; the aforementioned backing vocal harmonies; the rhythmic handclaps on ‘Keep Diggin’’ as well as the drumstick-on-drumstick sound on the same track; the thumping bass drum on ‘Back Down South’ – all providing the perfect background for the Lovell sisters to paint a gritty, organic picture. ‘Back Down South’ is one of many standout moments on the album, not just for the introduction of Rebecca’s husband Tyler Bryant on guitar, but for the vivid imagery that the lyrics paint. Taking time to directly namecheck Little Richard, and indirectly; James Brown, Charlie Daniels, and The Allman Brothers the track is a tipping of the hat to the musical heritage of The South – “The trees down in Georgia, Grow as tall as a cross, Where little Richard was singing, Where rock n roll learned to walk”.

The more country-esque side of Larkin Poe appears on tracks such as ‘Tears Of Blue To Gold’, where the lapsteel of Megan Lovell is king (as it is on the smouldering ‘Every Bird That Flies’). Lyrically, there are some subtle references to the King himself; Elvis. The protagonist of the track reminisces of times in Tupelo when they “…lived next door to royalty, a skinny little kid just like me” before adding “that skinny kid moved up to Graceland”. Fantastic storytelling. The faint country connection continues on ‘Ex-Con’, which travels the well-worn route of someone on the wrong side of the law having served their time and wanting to make amends. And like ‘Tears Of Blue To Gold’, fantastic storytelling. ‘Easy Street’ ends the album on an upbeat note, that will surely have rooms and rooms of songwriters on Nashville’s Music Row scratching their heads to try and figure out why they couldn’t come up with something so simple, but yet something so authentic that everyone can identify with.

Given that Larkin Poe had been on the road supporting previous album ‘Venom & Faith’, for what seemed like an eternity, it’s a revelation how fresh the album sounds. No signs of road-weariness here. More a case of striking when the iron is still hot. Expect that golden envelope from the good folks at the Grammys sometime soon.