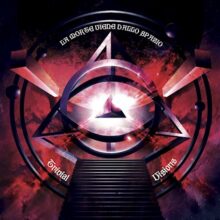 By describing themselves as a “Space ritual project from Milan, IT.”, La Morte Viene Dallo Spazio offers up a not-so-subtle hint at what the listener can expect when tuning in to their frequency. Growing up in a house with older siblings with a penchant for Hawkwind, as well as Steve Hillage and Gong, meant that the seminal Hawkwind live album ‘Space Ritual’ was very seldom off the turntable. Everything about it was magical; double vinyl, gatefold sleeve, incredible cover art, synths galore, music that helped the unsuspecting listener on a journey that was very seldom duplicated twice over – and Lemmy. It’s been a while since an album other than ‘Space Ritual’ reignited those memories: enter La Morte Viene Dallo Spazio and their latest album ‘Trivial Visions’.

With a shared love of Italian Sci-Fi/horror movies and their soundtracks, the quintet takes its name from the late ‘50s Italian Sci-Fi b-movie ‘La Morte Viene Dallo Spazio’ which translates as ‘Death Comes From Space’. The same spaced-out, trippy, “what-is-going-on” vibe that accompanied a lot of these movies finds a home with the realms of La Morte Viene Dallo Spazio (the band). 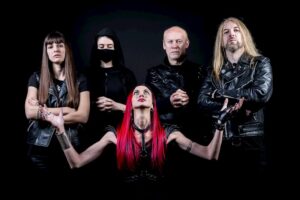 Mostly all instrumental, ‘Trivial Visions’ is the follow-up to 2018’s debut album ‘Sky Over Giza’, and the best way to tackle the album is to free your mind because the rest will follow. Within the free-form, improvisational nature of the album, the shackles of conformity are removed, and although the very use of the word “free-form” might cause outbreaks of catchphrases via The Fast Show Jazz Club, there is nothing to fear here as you are more likely to find more self-indulgence on a standard progressive metal album. The music on offer throughout ‘Trivial Visions’ runs the full gamut of sound; from black metal and fast-riffing to traditional folkie-prog with some subtle flute action, this is a beautiful head-fuck of an album. The incredible drum work featured on the title-track is played out behind a wall of spacey synths, pulsing industrial-like samples, and other-worldly vocals. Close the eyes and it’s an instant flashback to decades ago discovering ‘Space Ritual’ for the first time, but with a better drum sound.

With a sense of floating outwith your own body, ‘Cursed Invader’ is far lighter. The drum work is more subtle, and the use of samples and synths gives the track a real cinematic feel, the shimmering notes around 4:06 minutes are incredible and you might just find yourself “rewinding” this one to the start while you dig out a decent set of cans to fully appreciate the sounds on offer. ‘Ashes’ is another highlight; hints of a John Carpenter vibe early on give way to some stellar riffage, bad-ass drumming, and a subtle flute sound here and there – lookout for the sudden change in pace towards the end of the track.

The lack of vocals might put some people off, but with ‘Trivial Visions’ La Morte Viene Dallo Spazio have created an album that holds the attention from start-to-finish through impressive musicianship and well-crafted pieces of music (‘Spectrometer’ is particularly immense). Cast off the shackles and dive in.