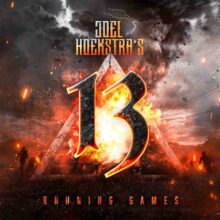 Although 2021 is only two months old, Frontiers Records are making it a year to remember for fans of top-quality melodic hard rock. Continuing this hot streak is ‘Running Games’, the long-awaited new album from Joel Hoekstra’s 13, which arrives some six years after the much-lauded debut album ‘Dying To Live’.

‘Running Games’ is akin to the first full album from Slash & Myles Kennedy, in the sense that it’s more of a side-project, and less of a solo album. It’s still very much the baby of current Whitesnake six-stringer Joel Hoekstra, but the most significant change from ‘Dying To Live’, being that Russell Allen (Symphony X, Adrenaline Mob) is sole lead vocalist, helps bring a “band” feel to the project. Co-lead vocalist from the debut album, Jeff Scott Soto, is still onboard, delivering lush backing vocals as only he can: does the guy ever sleep? Vinny Appice, Tony Franklin, and Derek Sherinian all return, as does Chloe Lowery from Trans-Siberian Orchestra on backing vocals.

Opening track ‘Finish Line’ gets the album off to a thrilling, uptempo start in a Dio ‘We Rock’/’Don’t Talk To Strangers’ vein. With original Dio drummer Vinny Appice behind the kit, the comparison holds some weight, although it’s the fiery riffs from Hoekstra, Allen’s towering vocals, and Sherinian’s keyboard solo that rams the point home. A superb, old-school album opening track. That guitar work though: scorchio. ‘I’m Gonna Lose It’ quickly follows on and Tony Franklin delivers one of his trademarked understated bass performances, decades on from The Firm and Blue Murder, Franklin is still as crucial as ever. The dualling solos from both Hoekstra and Sherinian help elevate this catchy-as-hell melodic little number, and the guitar work from Hoekstra, as the song builds to a climax, sizzles.

‘How Do You’ is an early frontrunner for the standout track on the album. One of those earworm moments which although new feels like it has been rattling around the listener’s skull for decades. The hooks and melodies are gargantuan and Allen reinforces his reputation as “most underrated vocalist…ever”, an uplifting and soaring track that oozes class. Allen continues to impress on the diverse ‘Heart Attack’; a track which at times recalls Moody-Marsden era Whitesnake just as much as it does Zeppelin (especially some of the background arrangements). The bluesy swagger throughout is particularly delicious. As are the slide licks on ‘Lonely Days’: a track that surprises by beginning in a metallic groove, before turning to the left and going down a lighter, more commercial route. If Hoekstra set out to pull the rug out from the listener’s feet now and again, then it’s job done.

In places, ‘Reach The Sky’ has more of that Whitesnake bluesier vibe, and Appice and Franklin combine yet again to make for an enviable engine room team. More surprises abound with a killer Dave Gilmour-esque guitar sound from Hoekstra mid-song and again as it fades out, ‘The Wall’ era Floyd. If the opening track ‘Finish Line’ sparked memories of Dio, then Allen’s vocals, and the melodic guitar interludes on ‘Cried Enough For You’ will double-down on those memories. So much so that one can only think that had Ritchie Blackmore not discovered Ronnie Romero on YouTube he might have called Allen for the Rainbow gig. Talking of the man in black; turn up this one and purr with delight as Hoekstra pays homage with multiple Blackmore-like flourishes. With a wonderful acoustic tone from Hoekstra that oozes a Tommy Emmanuel vibe, the chilled-out, blissful title track brings the album to a mellow conclusion. The gentle percussion from special guest Lenny Castro, and the string arrangements from Dave Eggar and Katie Kresek, help deliver an alright, alright, alright atmosphere. The only thing missing is Matthew McConaughey on the bongos.

With the calibre of the musicians involved, it’s no surprise that ‘Running Games’ is such a strong album. A genuine pleasure from start to finish.