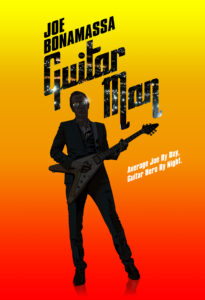 Watching ‘Guitar Man’, it becomes abundantly clear from the off that Joe Bonamassa was never going to fail in his quest to not only make a career from playing the blues, but said career would be successful. In the dictionary under “driven”, it should simply say; “see Joe Bonamassa”, and then have a link to this fascinating, immersive documentary.

The dual-personality of Joe Bonamassa is perfectly explained by long-time producer/collaborator Kevin Shirley: “…here’s Joe with his baseball cap and his blue jeans on. At 7.25 he puts on his suit for an 8 o’clock show, slicks his hair back, puts on his sunglasses, has a glass of wine…and Joe Bonamassa the recording artist comes out, and then he’s a different guy, he’s a little bit Howard Hughes, he’s a little standoff-ish, a little isolated…”. With Bonamassa himself backing that up: “…at 7.25 pm I gotta go become the other guy…the other guy in the suit..it’s a persona…a different side to my personality…”. And that “other guy” is the most successful artist of all-time on the Billboard Blues charts. 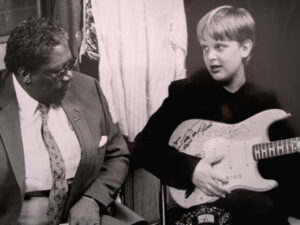 Beginning with footage of Joe at home (arguing on the phone about an unpaid bill) ‘Guitar Man’ is an inspirational story. Some of the early footage of Joe as a school-child, where TV ran a story about his guitar prowess, is already out there, but it’s still incredible to watch the birth of “Smokin’ Joe Bonamassa”. Playing since the age of 4, gigging from the age of 12, family has been paramount to Bonamassa. He seems to have inherited the music bug from his great grandfather “Buddha” Bonamassa who was a revered trumpet player and passed his love of music onto three generations of Bonamassa’s. There’s also the extended Bonamassa family which includes Roy Weisman who has been Joe’s manager since the early days. And it’s Weisman who relays the story of Bloodline, the ill-fated band that Bonamassa played in with the offspring of Miles Davis, Robby Krieger, and Berry Oakley. Short-lived it would seem due to the others not having the same work ethic as Smokin’ Joe…” an old man in a kids body…”.

The brief link-up with Steven Van Zandt is touched on and includes some footage of a teenage Bonamassa looking very alt-rock, and actually, quite unhappy. The kid wanted to play blues, and esteemed producer Tom Dowd came onboard, to Joe’s delight, to produce the 2000 debut album A New Day Yesterday. The usual record company shenanigans, coupled with the advent of Napster, meant that Bonamassa and Weisman set up J&R Adventures to make their own records, the way that they wanted. An adventure which in 2006 saw Bonamassa release his ‘You & Me’ album, not only notable for being arguably his best-received album up to that moment, perhaps more notably, the first album to feature the legendary Kevin Shirley as producer. 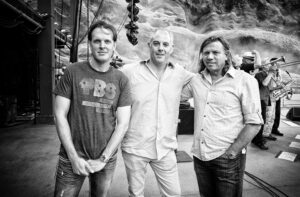 Weisman approached Shirley, who happened to be looking for something “more organic”, with Weisman joking “…well, you’ve come to the right place, we’re so organic we don’t have money to pay you!”. Bonamassa is honest in his thoughts about Shirley; “my initial reaction was…why would Kevin Shirley want to produce me? Kevin Shirley does big-time records like Led Zeppelin, The Black Crowes, Iron Maiden…”. But after catching Joe and his band in a club, Shirley was in. The band had to go though. And in came an A-Team of seasoned pros and top session players, one of which was future Black Country Communion bandmate – Jason Bonham (the segment later on, dealing with BCC, is very eye-opening). And thus began the evolution of Joe Bonamassa into the “other guy”.

Through heaps of interviews, studio footage, and tour-bus footage, the relationship between Bonamassa and Shirley is presented front and centre. Time is spent detailing how Shirley brought the track ‘Sloe Gin’ to Bonamassa and how he felt that it was perfect for Joe. The story about how ‘Story Of A Quarryman’ from ‘The Ballad of John Henry’ came to be, is a toughie, at times both heartfelt, and funny, especially the role that Google Earth played in the story. Bonamassa shows his vulnerable side during this segment, but through the heartache came something special: the track ‘Happier Times’. Upon which, Shirley gave Bonamassa the simple instructions – “Everything that you feel…put on this guitar…try and tap into what you have”, and the end result was one of the greatest guitar solos ever recorded, and all in one take.

Bonamassa and Shirley are kindred spirits because they both have an adventurous side, and, best summed up by Bonamassa; “…feel the need to throw a cherry bomb in the world…well, we’ve done this, let’s do something different…”. That “something different” appears in the guise of many critical events in the history of Joe Bonamassa. First of all, is the 2009 Royal Albert Hall gig. Through the words of Roy Weisman, the viewer learns exactly what went into booking the gig and how much of a risk it was, both financially and career-wise. As the footage unfolds, the viewer is thinking about how happy Bonamassa looks. His family is over for the gig, in the world-famous venue where his heroes Cream played their farewell gig, and he has managed to get one of those heroes, Eric Clapton, to appear onstage with him. But as Bonamassa explains, looks can be deceiving; “I look back at the DVD (of the show) and think…man I’m having fun! But I wasn’t! That was pedal to the metal, and I knew that my whole career was on the line”. 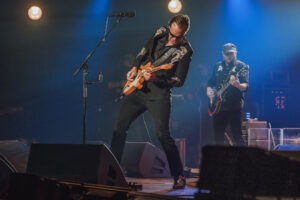 Recording in Santori, Greece, and putting “world music into blues” produced the stunning ‘Black Rock’ album, and Bonamassa again avoided going down the cookie-cutter route, saying; “Whatever they say about me, they cant’ say…we don’t take a risk”. There is great footage of Joe with local musicians, breaking down the language barrier with music truly proving to be universal. A sun-kissed Joe looks peaceful, at ease, he might even be the person dive-bombing off a cliff into the Med. These sessions seemed to be the catalyst for more thinking outside the box. Claude Nobs (funky Claude to you and me) brings Joe to Montreaux for the world-famous Jazz Festival, he performs an acoustic set at the Vienna Opera House. Tributes are paid to blues giants through various special events, all recorded for posterity.

As the documentary nears its conclusion, talk turns to Joe’s ‘Keeping The Blues Alive’ foundation, and it’s obvious that this means a great deal to Bonamassa. Giving something back is vitally important, and the foundation puts funds and instruments into schools to make sure that kids get the chance to discover music, especially since the arts are usually the first area to be hit by budget cuts. The mission statement seems to be to “…promote all things blues…”. As the chat winds down, Bonamassa offers up his own conclusion to the Joe Bonamassa story; “I’m very interested to see where the influences are going to come from and how the blues are going to be interpreted in the next 10,20,30,40,50 years…” before adding with a wry smile…”…after I’m dead, I don’t care!”.

‘Guitar Man’ is an engrossing watch. It’s an inspiring tale about perseverance, about wanting to be the best, about how hard work and determination can pay off, about how you don’t need to be fashionable to be a success, about the good guy winning in the end. But, ultimately it’s about family (blood, or not) and friendship. Pay attention to the end credits for a heartwarming scene recorded backstage at the Royal Albert Hall gig, which involves the Bonamassa family, and great grandfather “Buddha” Bonamassa. Saying no more.