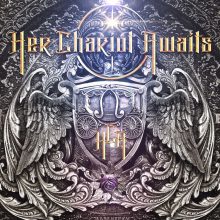 Unlike the majority of Frontiers Music collaborative projects, ‘Her Chariot Awaits’ was recorded the old-fashioned way; in a studio, at the same time. The two main players, Adrenaline Mob guitarist Mike Orlando and ex-Sirenia vocalist Ailyn, were actually in the same room at the same time, which cut down on the need to electronically send files of music. This proved to be a masterstroke, as the end result is an album which feels like it has been produced by a “band” rather than a “project”.

Beginning with the full throttle, foot-down pacey ‘Misery’, Ailyn, Orlando, bassist Brian Gearty and the hard-hitting Jeff Thal on drums don’t hang about. A perfect album opener, ‘Misery’ allows the casual listener to consume the full range of a vocalist perhaps unfamiliar to many outside of symphonic metal circles. The opening scream that signals Ailyn’s arrival is earth-shattering, almost as if she is expelling all the demons remaining after her departure from Sirenia. The poppier side to her vocals shines through during the early stages of ‘Dead & Gone’, which at times is almost like a harder-edged Pat Benatar (ditto ‘Screaming Misfire’), then there is a brief flick of a switch and the raw, harsher vocals appear. ‘Stolen Heart’ goes down a Green Day-like bass-heavy path, and it sounds like Jeff Thal has been given free range to roam, as he is all over this punchy little number. Thal continues to shine on ‘Say No’, which is the perfect example of how a drummer can steal a track. The top notch production and mixing making sure that the man at the back can be heard loud and clear.

Ailyn is a revelation. Her symphonic metal chops could never be doubted, and here, she has been given more room to breath and stretch out. The “harder-edged Pat Benatar” resemblance from earlier runs through the album from start to finish, with the in-your-face attitude of ‘Line Of Fire’ being a prime example. ‘Turning The Page’ being another. The softer tones found on ‘Just Remember’ showcase a vocalist delivering some of her best work, and it would seem that she has found the perfect sounding board in Mike Orlando, which makes for a fantastic partnership with limitless possibilities.

With the two main protagonists coming from different backgrounds; the powerful hard rock of Adrenaline Mob and the symphonic metal strains of Sirenia, Her Chariot Awaits was always going to be an interesting proposition. With Mike Orlando involved, the casual listener was going to be guaranteed one thing – guitar fireworks –  and this, the self-titled debut album has them in abundance. Highly respected by his peers, Orlando is a guitarist’s guitarist; flash when he needs to be, restrained when required. As a side note, it is fantastic to hear Orlando in full flow again after the horrific fatal traffic accident involving Adrenaline Mob’s tour bus back in 2017.