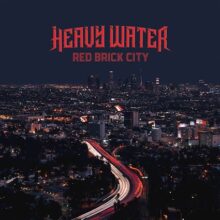 So, there are plenty of entries in the category of “famous father and child musicians” (Bob and Jakob Dylan, Bob and Damian and Ziggy Marley, John and Jason Bonham, Willie and Lukas Nelson, even Billy Ray and Miley Cyrus…), but with a few exceptions, when it comes to pairings that have actually formed a band and recorded an album together, then that category is pretty light on the ground. Enter Saxon (and metal) legend Biff Byford with his son Seb Byford and ‘Red Brick City’, their debut offering as Heavy Water.

Some good things have come out of the pandemic and subsequent lockdown: musicians collaborating together, and the staggering amount of high-quality music releases being just two examples – sheep taking over a deserted children’s playground in Wales being another. With Saxon being perennial road warriors chances are that Heavy Water and ‘Red Brick City’ might not have come to fruition had live shows and tours not been affected by the pandemic, which would have been unfortunate because this album is more than a stop-gap between lockdowns, and an album that stands proudly on its own two feet.

‘Red Brick City’ is essentially a blues-based hard rock album, and thanks to the fine bass work from Byford senior, and a stellar drum sound from Tom Witts, it will rattle the fillings in your mouth loose. Seb Byford handles the guitar duties with great aplomb and together, both father and son cover the vocal duties. Add some heavy, atmospheric keyboards, and a dash of saxophone (both from Dave Kemp), and you have the makings of an impressive band, and when they all lock into a meaty Audioslave-like groove on opening track ‘Solution’ it sounds bloody massive. Dreamy, trippy co-vocals, Beatles-esque backing vocals, and hypnotic basslines from Biff all work perfectly with Seb’s atmospheric guitar licks to make for an opening track that will take many by surprise. Fuelled by Biff’s rumbling bass, ‘Turn to Black’ is a slow-burning, percussive-heavy piece with multiple changes in pace and style that doesn’t sound too far away from a modern-day version of Vanilla Fudge or Budgie (the jam that serves as an outro is particularly goosebump-inducing). The title track is all muck and muscle, with a slow, menacing, grunge vibe about it, and it’s hard not to be impressed by some of the Kim Thayil-sized riffs from Byford junior. ‘Red Brick City’ is an album full of surprises and ‘Tree in the Wind’ is perhaps the biggest and best surprise. Keyboard-led intro, slow and powerful, almost spoken-word-like vocals from Biff blending well with Seb’s rich, gravelly tones, gorgeous vocal harmonies from both, the end result being a ballad (of sorts) without the schmaltz. Seb continues to impress throughout, with both his vocals and his guitar skills, especially on ‘Revolution’, which is the frontrunner for standout moment on the album.

The back end of the album sees no sign of either the quality or the variety on offer, dipping. ‘Personal Issue No. 1’ and ‘Medicine Man’ puts anything that Royal Blood have released recently to shame, and it would be interesting to see the reaction from those at BBC Radio upon hearing the latter, and then being told that it features the frontman of British heavy metal band. The music on offer throughout ‘Red Brick City’ might be steeped in an ever-so-slight blues influence, but it’s also modern and fresh at the same time, and anyone falling over themselves to praise Royal Blood could do worse than checking out these two tracks. ‘Follow This Moment’ is another standout few minutes, purely because it is so light and airy, and comes straight out of the left-field – especially the sax solo! ‘Now I’m Home’ is played at a lazy Sunday afternoon-jam pace, and it’s pretty hard not to be swept up by the laidback, blissful vibes over the few minutes that the track runs for. Ending on the modern-day blues shuffle of ‘Faith’ (complete with a bass homage to Paul McCartney from Biff), this is an album that constantly delights, as well as constantly surprises. The temptation to call the project “Byford” must have been strong, and there is always the risk that ‘Red Brick City’ might get overlooked because it is quite lowkey, but those savvy enough to know who is behind the album will be richly rewarded when they check it out, as will those who happen to stumble across it on a Spotify playlist or YouTube recommendation.