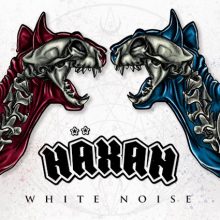 Having been a regular on the UK gig scene for a few years now, the urge to rush out their debut album must have been very strong for Cardiff-based trio Häxan. After a few years gigging under their belts, refining their song-craft, as well as gaining some great press with the ‘Breaking Down The Walls’ EP back in 2017, the band have unleashed debut full-length album ‘White Noise’.

The first thing of note regarding ‘White Noise’ is the variety found within the nine featured tracks. The trio plant their flag firmly in the field marked “rock” but peel back the covers and there is way more to Häxan than meat and two veg rock. The lighter-than-light vocals from Sam Bolderson lend a power-pop edge to Häxan, and on moments such as ‘Louder Than War’ the listener might pick up a hint of The Wildhearts. Or the shuffling, bluesy guitar licks on ‘Crash And Burn’ which mesh with a modern rock sound (ala Halestorm) to cook up a swirling, intoxicating brew complete with killer guitar licks that sneak up and slap you round the chops. Iron Maiden guitar melodies mixed with lashings of Suzi Quatro sass? Check out opening track ‘Damned If You Do’ and album closer ‘Living Dead’, it’s easy to imagine a 2020 version of Leather Tuscadero cranking these suckers out. Lovely touch with the layered backing vocals on the latter by the way.

There is also a heavier side to Häxan. ‘Killing Time’ for instance has a classic ‘Holy Diver’ Dio feel to it, especially Bolderson’s guitar tones, and the precision basslines from Harriet Wadeson, which combine with the nailed-on drumming from Jess Hartley to make for quite a wall of noise. ‘Nine Lives’ is a fast-paced, driving rocker with fantastic vocal harmonies, and subtle changes in tempo during the back end of the song. ‘Grave Digger’ is a bovver-booted, stomper of a track with a classic hard rock/metal feel, and ‘Skeletons’ is a gloriously uplifting earworm of a track with some rather lovely background guitar flourishes.

Expertly produced, mixed, and mastered by Todd Campbell (Phil Campbell and the Bastard Sons), ‘White Noise’ is a case of good things coming to those who wait and proves that the decision to hold off on recording a debut album was a wise one.