Review: Halestorm – ‘Back From The Dead’ 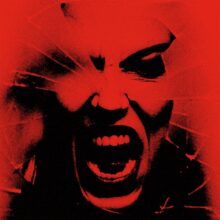 ‘I’m back from the dead’’ bellows Lzzy Hale in her own inimitable style as she signals the beginning of a new Halestorm album with the crushing title track. To be honest, though, that should read “I’M BACK FROM THE DEAD”. All caps for a good reason, for not only is studio album number five undoubtedly the heaviest offering to date from the Grammy-winners, but it is also a celebration of life, and a celebration of a band robbed of what they were put on this earth to do – play live. After staring into an abyss of uncertainty for the last few years, perennial road-dogs Halestorm come crawling out of the post-covid wreckage having survived the biggest obstacle that they have faced in their career to date…and delivers an album heavy enough to make Cerberus itself turn tail and retreat back into Hades, never to be seen again.

Only one track could have opened arguably the most important album in Halestorm’s history to date, and the title track lands with an almighty explosion of sound that jolts the unsuspecting listeners to attention. Full of Halestorm trademarks such as ridiculously infectious vocal hooks, and Arejay Hale venting his frustration by battering the living daylights out of his kit, ‘Back From The Dead’ is loud and brash like all album openers should be, but it’s the extra little nuances that become more apparent with every fresh listen that stick out the most; the maelstrom of noise that both Lzzy Hale and fellow six-stringer Joe Hottinger concoct (Hottinger, in particular, is fast developing into a Mark Tremonti-like face melter, and it is an utter joy watching him grow into a guitarist of some stature), the guitar notes that bend almost in a Jerry Cantrell kinda way, the crucial bass work from the quiet man of Halestorm Josh Smith, and when Ms. Hyde declares that “Hell couldn’t hold me down…” you know that she is deadly serious. 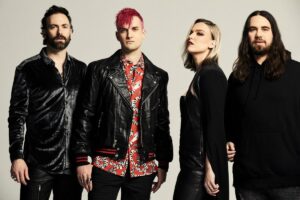 With the restraints of the pandemic finally cast off, Lzzy Hale sounds even more larger-than-life than usual, and on moments such as ‘Wicked Ways’ her vocals are harsher and her screams are more prevalent (as they also are later on during ‘Psycho Crazy’). ‘Brightside’ is an interesting number, one that might slip through the cracks thanks to the big-hitters on the album. At times it is metal-as-hell, and at other times it takes on more of an alt-rock vibe; think Garbage fucking around during soundcheck and taking the brakes off. First listen should be through a decent pair of cans – maybe even late at night in a darkened room – and when Lzzy whispers “…nobody likes you…”, prepare to freak the fuck out. 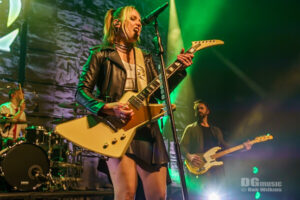 During the recent sold-out run of “An Evening With Halestorm” shows, ‘The Steeple’ slotted perfectly into the slot of the main set closer, and the call-and-response nature of the track means that it is going to be around for quite some time. Anthemic to the point of perfection, it’s a few minutes delivered in a sermon-like manner from Lzzy Hale who is preaching to the congregation. Although it is not played at the same tempo as Dio’s ‘We Rock’, it carries a similar message – as does album closer ‘Raise Your Horns’ – and that elongated note from Lzzy towards the end is enough to make the neck hairs stand to attention. Ballads usually land mid-album and ‘Terrible Things’ does exactly that. Pay close attention to the opening lines and around thirty seconds into the track you might just pick up a slight tip-of-the-hat to the much-missed Dolores O’Riordan of The Cranberries. The lighter-than-light acoustic pickings and gorgeous string arrangements help bring a sense of epicness to a track that long lingers on after it fades out and if you have ever caught the stunning orchestral version of The Cult’s ‘Edie (Ciao Baby)’, then meet its distant cousin. ‘Bombshell’ is another new track aired on the recent tour, and here it sounds even bigger. Josh Smith plays a major role in this one and once the industrial tinges of the opening few moments fade out, and the band slams in…Smith takes over and lays down some big-ass bass licks. At times his instrument takes pride of place, and along with some catchy vocals from Lzzy (the spoken word parts bring Madonna to mind), and some swirling guitar breaks in the background; this is three minutes that improve with each listen. 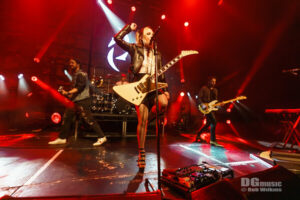 As you might expect from an album born out of dark times, ‘Back From The Dead’ is a dark album, and issues such as faith, redemption, good vs evil, or even good and evil, feature constantly. Lzzy Hale doesn’t say “Gee, I hope you like this”, she grabs the listener by the scruff of their neck and says “C’mere…”. Artists suffer for their art, and it is easy to imagine that Lzzy Hale put herself through the proverbial wringer writing the album, but ultimately her suffering has produced some stunning moments on an album that – like most albums that stand the test of time – is a real slow-burner worthy of several visits. One thing is for certain though: Halestorm has given themselves one almighty headache with regards to putting a setlist together for the upcoming US tour. What the hell do they leave out? Answers on a postcard to Lzzy Hale, Nashville.