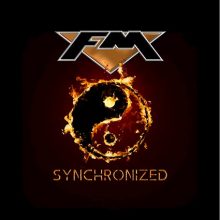 Since reforming in 2007 British AOR legends (and for once that word is very apt) FM have been on a hotter-than-hot winning streak. Each new studio album continues the rich vein of form that began with ‘Metropolis’ ten years ago. Hardly surprising then that ‘Synchronized’ can be added to that list, in fact it would be more of a surprise if it was substandard.

With the golden-throated Steve Overland (the genre’s most underrated vocalist?) still in the form of his life, and the sun shining (for now), the timing is perfect for a new FM studio album.

Twelve tracks of highly polished, well-written melodic rock which at times rolls back the years, and raises the conundrum of why weren’t FM household names in America during the ‘80’s? Throw a dart at ‘Synchronised’ and it will land on a track that should’ve, could’ve gone platinum in the golden days of MTV. Impossible to listen to the likes of ‘Walk Through The Fire’ and not imagine the smokey, high budget Miami Vice-style video on heavy rotation, while every teenage girl has a poster of FM bassist Merv Goldsworthy on her wall. ‘Superstar’ is prime Don Henley-meets-Tom Petty, ‘Best Of Times’ is the best song that Bob Seger never wrote, ’Ghosts of You and I’ is an unashamed tour-de-force ballad (as is the poignant ‘Angels Cried’), and Michael McDonald will be kicking himself for not writing ‘Broken’. If Simple Minds became giants in America on the back of ‘Don’t You (Forget About Me)’, then ‘End Of Days’ would have put an extra wing on the FM mansion. The Steve Perry-esque vocal harmonies on the latter are especially memorable and rattle around the listeners mind for some time after.

Even though there are a great deal of references to the ’80’s above, ‘Synchronized’ is a fantastically fresh album from a band bucking the trend by still producing great material decades after they first appeared on the radar.