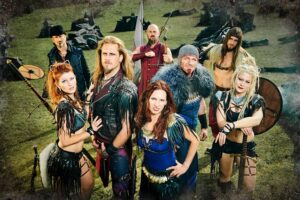 When it comes to more bang for your buck, Napalm Records are pretty much untouchable. Nuclear Blast runs them a close second, but when push comes to shove, Austrian-based Napalm is the market leader. Deluxe packaging and incredible content are standard for Napalm – check out the recent unboxing of the forthcoming Warkings album – and if further proof is required of how much care and attention goes into a Napalm Records release then here comes “exhibit A” in the guise of ‘Die Letzte Schlacht’ – the brand new retina blitzing live release from German medieval rock outfit Feuerschwanz.

Spread over many different formats including gatefold vinyl, and a gorgeous 2-Blu-Ray + 2-DVD/CD mediabook version, the bulk of ‘Die Letzte Schlacht’ is made up with footage from January’s live-streamed gig. The entire gig is here in glorious HD quality, as well as ‘making of’ and ‘after movie footage, plus having 2020’s ‘11:O:A’ live streamed gig as an extra bonus disc means the bang for your buck mentioned earlier is working overtime. 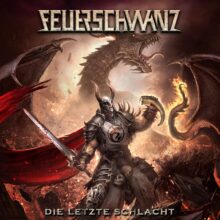 Someone took a lot of time over this bundle, and it shows from the off. The ‘pre-movie’ opens with band leader Hauptmann Feuerschwanz lying dead in a forest clearing, and with the English translation of ‘Die Letzte Schlacht’ being ‘The Final Battle’, it’s fair to say that he seems to have met his fate. The remaining band members pick him up and carry him to a burial place guarded by Feuerschwanz “kittens” Myu and Musch Musch, all the while the music is beginning to swell and the footage is intercut with shots of a grandiose stage production awaiting the band. Once the intro fades, guitarist Hans der Aufrechte cranks out the opening riffs to ‘Lords of Powermet’ and the stage comes to life in an explosion of sight and sound. Multi-instrumentalist Johanna von der Vögelweide is prowling the length of the top tier of a three-tiered stage with her trusty violin to hand and it’s hard not to get swept away by the look of sheer joy across her face as the other band members do their thang below her. Hauptmann is alive and well, and working the entire stage with his co-vocalist and multi-instrumentalist Prinz Hodenherz, or “Hodi” to his friends, and the end result is goddam beautiful to watch.

Johanna comes down to the front for ‘Metnotstand im Märchenland’ and with Hodi alongside her on the flute, she brings a sense of a medieval shindig to the gig. The kittens also join the band onstage to provide a cheering section, and with Hauptmann performing with an oversized medieval hammer, it all makes for great entertainment. Feuerschwanz are masters of tongue-in-cheek fun, and that’s the message that comes shining through the entire 90-minute set, but they are also incredible players and at times it’s hard not to break out the windmills for Hans’s playing (especially on ‘Totentanz’ and ‘Methämmer’). ‘Die Hörner Hoch’ is the perfect beerhall drinking anthem, and sadly there isn’t anyone in attendance able to raise a drinking horn when the Hauptmann raises his, but it is easy to imagine this being a particular standout moment of audience participation when it is played in front of a real-life crowd; when the band lock into a jig near the end, it is almost impossible to resist. 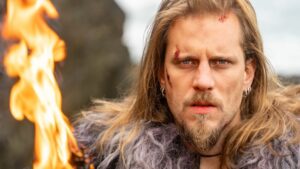 Does it matter that (with two exceptions) the band performs in their native German? No. Not at all. Even with the between-song banter being in German, any non-German speaker can’t help but get caught up in the exuberance of moments like ‘Das Elfte Gebot’, ‘Metfest’ (which sees the Hauptmann and Hodi performing the song whilst sitting in armchairs drinking a beer), the insanely-catchy ’Meister der Minne’, a riotous version of ‘Ding’ (which features Hodi taking on the vocals that Melissa Bonny performed on the album version), and don’t let the fact that you might not have a clue what is going on during ‘Hauptmann und Maid’ spoil your enjoyment, just let your hair down and go with the flow, for it truly is a gonzo few minutes that also features a virtual guest performance from the always amazing Patty Gurdy, and a few of Saltatio Mortis who are there in person. Another guest performer there in person is Angus McFife from Gloryhammer who pops up to lend a hand on the incredible cover of Ed Sheeran’s tale of Hobbits and dragons – ‘I See Fire’. After a brief pause for the black-metal video of ‘Schubsetanz’, the trio of Ghost-with-bagpipes ‘Malleus Maleficarum’, followed by ‘Krieger Des Mets’ and a magical version of ‘Unter dem Drachenbanner’ brings the gig to a stunning conclusion and the only thing left to do is pop the second disc in and continue the party with the other live streamed gig: ‘11:O:A’.

Expertly shot, with fantastic sound, and incredible stage production, Feuerschwanz have managed the near-impossible feat of making a gig with no one (outwith the band and crew) there seem like there was a thousand-strong crowd in attendance. The organisers of Bloodstock surely have these guys in mind for 2022?