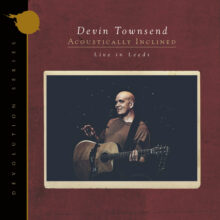 Reviewing live albums is a weird thing. Essentially you are reviewing a gig without actually going to the show, but thanks to covid-19 this is about as close as we’re likely to get.

God-like genius is a description that is often overused but Devin Townsend is truly worthy of that title. Devin’s music is complex, multi-layered, and usually heavy as hell, however for the first few shows of his tour in support of his “Empath” album he went back to basics. Armed with only an acoustic guitar and a couple of effects this is about as stripped down as we can expect. Devin greets the crowd and takes a few moments to tune and warm-up. He shares a few laughs with the crowd and it’s apparent this will be a very laid-back show. Once tuned up we are treated to a thick lush acoustic bathed in reverb and echo filling every space. Devin’s guitar wraps you in some sort of aural blanket and it feels oh so comforting. Despite this being the “Empath” tour, Townsend doesn’t play anything from the new album, instead apparently picking songs at random from his catalogue including an amazing and unexpected version of “Love?” from his Strapping Young Lad days.

Now, we need to talk about Devin’s vocals. This guy can sing you a lullaby and in a single breath switch to scaring the shit out of you with a death scream. The great thing about the acoustic show is it really shows off just how incredible a vocalist Devin is. At times his voice is as quiet as a whisper, at others, it soars into the ceiling and beyond. A personal highlight for me has to be “Deadhead”, Even with Devin screaming his heart out I still find it comforting and beautiful. This release is part one of the ‘Devolution Series’, a series of odd material scheduled to be released across the next few months/year including his quarantine concerts. If they are half as good as this release I cannot wait. The thing is, Devin Townsend’s fans will buy this album regardless of what I say but if you have been living under a rock and are not familiar with him, Buy This As Soon As You Can!

‘Devolution Series #1 – Acoustically Inclined, Live in Leeds’, will be released on March 19th, 2021