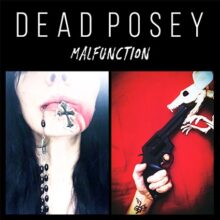 Buoyed by the success of their ‘Don’t Stop The Devil’ single, as well as subsequent music placements in programmes as varied as WWE, Lucifer, Marvel’s Jessica Jones and (ahem) Jack Whitehall’s Travels With My Father, L.A. based Dead Posey strike with sophomore effort: ‘Malfunction’.

Expertly self-produced (in their home studio) by the wedded duo; vocalist/co-producer: Danyell Souza and multi-instrumentalist/producer: Tony F., this is an altogether darker affair than 2018’s debut EP; ‘Freak Show’. ‘Malfunction’ takes the bluesy, swampy sound from the debut and turns it on its head with lashings of industrial-tinged electronica. You’re as equally likely to pick up a hint of Marilyn Manson as you are a Depeche Mode influence.

There’s so much to admire about this little beauty. First point of reference would be the striking cover art designed by Danyell, the rat with the gun in its mouth: mind blowing (literally). Then the pulsating, industrial pounding of opening track ‘Head Of The Snake’ begins to build, and the volume dial starts to creep skywards. The call-to-arms chorus is a real earworm moment which is simply irresistible, and coupled with a fantastic drum sound, fiery riffage, and a hypnotic vocal performance, this is the perfect opening track.

‘Parasite’ is the lead single, a deep, pulsating, groovy intro (complete with cool background vocals from Tony F.) quickly explodes to live with more gutsy vocals from Danyell. A fantastic mix of industrial electronica with modern rock, nailed-on arrangements, and co-vocals full of massive hooks. There is an ever so slight guitar tone running in the background which becomes clearer towards the end of the track; very subtle, totally gorgeous. ‘Bad Things’ ramps up the electronics with a mysterious, alluring vibe, on a real smouldering, slow-burning track. The “….bad things come in threes” vocal hooks live on for some time after. If the remit was to create a few minutes that burrow into the listeners psyche; then job done. ‘Holy Roller’ is a fantastic, percussive beast of a track, the louder it gets, the better. Quite a sultry track with an impossible-to-resist groove running throughout. The kind of track where you could quite possibly make a fool of yourself by giving in to the groove and busting some moves. But then again, dancing is subjective, so who is to say what constitutes looking like a fool?

As Dale Cooper would say: this is damn fine coffee.

Previous ANOTHER DAY DAWNS: Release “Forget Me Not”
Next AMARANTHE: Announce ‘Manifest’