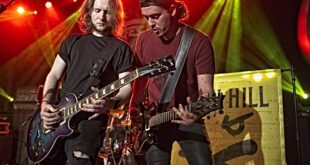 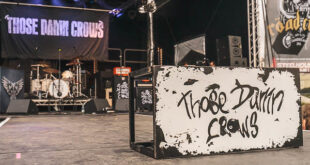 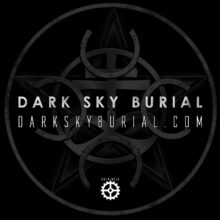 Being part of Napalm Death means that you are going to be spending a lot of time on the road. One of the hardest working bands on the circuit, Napalm Death, and tour buses go together hand in hand like Boris Johnson and lying; but then the world stopped turning and live music ceased to be a real thing. Rather than binge on serial killer documentaries on Netflix like everyone else, ND icon Shane Embury finally had the time on his hands to get his ambient/industrial project of the ground and since then, has released three albums as part of the Dark Sky Burial project.

“With the COVID 19 pandemic sweeping the globe last year suddenly there was an opening for me to finally take my ideas for DSB and make them a reality – I had been recording loops of music and sounds whilst being on tour for a few years – being away from my family and becoming older life was changing and my quest for making different types of music was constantly expanding through the other different types of projects I was working on. How we deal with the challenges of life and pressure is a concept that runs deep in theme through these albums.

To face our shadow and establish balance is a quest for all of us – a perilous journey we can choose or not choose to face – the outcome who knows. “

With the gradual return of live music, Embury recently embarked on his maiden voyage with Dark Sky Burial at the Underworld, Camden, and the cameras were there to beam the set out to fans everywhere across the world. Embury – not only one of the most liked figures of the underground metal scene but also one of the most respected – enlisted Carl Stokes from Cancer (drums and twirler of synth knobs) and John Cooke from Corrupt Moral Altar (and Napalm Death touring guitarist) to make up the Dark Sky Burial live line-up, for this their debut live gig.

Dark Sky Burial has released three albums in just under 18 months; debut album ‘De Omnibus Dubitandum Est’ was released in April of 2020, ‘Quod me Nutrit me Destruit’ followed in February 2021, and then ‘Vincit qui Se Vincit’ arrived in August 2021 (all available via Bandcamp on Embury’s own Extrinsic Recordings label). The final part of the quadrilogy is set to arrive by the end of 2021.

Dark Sky Burial is not like Napalm Death in the slightest, fans tuning in and expecting furious blasts of music such as ‘When All Is Said And Done’, or the brutality or ‘Twist the Knife (Slowly)’ were met by a seated Embury doodling away on his trusted bass, occasionally pausing to read out some spoken-word lyrics and vocalise – for the most though, Dark Sky Burial is instrumental. Anyone who grew up with Hawkwind on the stereo, or dodgy VHS copies of Italian Horror movies playing on a massive, clunky video player, will find plenty to enjoy in Dark Sky Burial’s music, as will anyone who digs the work of the Horror Master himself; John Carpenter. The music on offer from the trio is dark, brooding, and trippy as hell, and anyone who is looking for something a bit different to come down to will find plenty to spread out to from Embury and company. The darkly lit stage is the perfect ambiance for the music that Dark Sky Burial produces, and whoever said that drummers can’t multi-task needs a slap, and be forced to watch footage in an Alex of Clockwork Orange-style of Carl Stokes blowing minds with his intense, deft drumming and keyboard knob-twiddling. The running time of the live set is kept to under an hour which means that casual viewers, and anyone who normally balks at instrumental music don’t really have the time to get bored. But it’s beneath me how anyone could not enjoy Shane Embury sitting down, barking lyrics into a microphone like some sort of spaced-out sibling of Brian Blessed. Discover for yourself the next time that Dark Sky Burial goes live: more information, here.