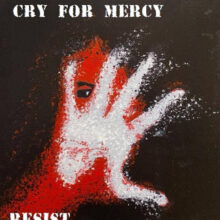 Although the last 13 months or so have been a tough time for musicians unable to ply their trade on stage, it’s also been a fertile time for those same musicians to create music in the recording studio. It seems that a week doesn’t go past without several top-quality rock albums seeing the light of day, and one particularly pleasing aspect about this is the sheer amount of these top-quality albums that are being released by new bands. With their debut album ‘Resist’, North West Wales trio Cry For Mercy is the latest band to plant their flag firmly at the summit.

Inspired by trailblazing ‘70s British acts such as Free, Bad Company, Humble Pie, Frankie Miller, and late ‘70s/early ‘80s Bernie Marsden-era Whitesnake, ‘Resist’ is 12 fine slices of guitar-driven blues-rock with the emphasis on stellar songcraft and passionate playing. Made up of James Plant (vocals/bass), Andy Cutty (guitars/vocals), and Steven Taylor (drums), Cry For Mercy have issued a few EP’s as appetizers and are now onto the main course with ‘Resist’, and those who already have EP’s ‘Overload’ and ‘Automatic Breakdown’ need not fear, for ‘Resist’ doesn’t contain material from either EP.

The uptempo ‘Brother’ opens up the album and expertly meshes together the faster opening moments with the latter stages of the song where the band turns it down a notch or two and becomes more reflective. Although lead-single ‘Roll The Dice’ slows the pace down, the intensity still continues to flow with some killer Bernie Marsden-like guitar licks, and a thumping performance from the man behind the kit. The vocals from Plant are exquisite, just on the right side of grittiness without developing a rasp, and when the three players lock into a groove, it is rather special. Fans of anything that Paul Rodgers has put his name to will dig the title track, the soulful vocals from James Plant are perfect and you never get the impression that he is overreaching. Pop this bad boy on an American classic rock radio station playlist and the lamb shanks would lap it up. The opening stages of the album conclude with the big-ass riffage of ‘Chasing Me Down’, a killer, pounding track in a Thunder-esque vein (as is ‘Yesterday’s Man’ which appears later on).

The towering ‘Healing’ is the centre point of the album for a reason, it totally slays. Blues-rock par excellence; ‘Wishing Well’ for a new generation – smooth vocals, riffs you can chew on for days, and just a really, really good-vibe song. ‘Hear You Coming’ continues down that well-trodden Free influenced path, and thanks to the added grit, Plant’s vocals spark memories of both Paul Rodgers and Frankie Miller. As they do on the magical ‘Born To Fly’, the kind of track that you might send to your mate who is always bitching that “they don’t make them like that anymore”, attach a note that says “yes, yes they do” and they might just take the hint. Closing track ‘On And On’ is the hardest and heaviest of the 12 featured tracks, and if you have ever wondered what AC/DC fronted by Paul Rodgers might sound like, then wait until the latter stages of the track kick in and wonder no more.

‘Resist’ is a great way to announce your arrival, it’s brimming with confidence but without ever being flashy or arrogant. If Thunder are feeling even more generous than they already have been by popping Those Damn Crows on the Cardiff date of their forthcoming arena tour, they might open the doors 30 minutes early and give Cry For Mercy a shot at getting the punters out of the overpriced bars. That would be something special.