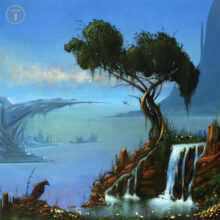 By now Canada’s Crown Lands should have made their UK debut opening for Larkin Poe on their UK/European tour, as well as stopping in at Ramblin’ Man Fair for their maiden UK festival appearance. But, shit happens, and in 2020, it sure as shit has happened. Thankfully the duo from Oshawa, ON. will make the rescheduled dates that begin in Dublin in February 2021, for what will surely be one of the hottest tickets in 2021.

The self-titled debut album is on the way, recorded in Nashville by Dave Cobb no less, but to tide things over until then, Crown Lands have produced a new EP; ‘Wayward Flyers Volume 1’. And rather special it is indeed.

‘Wayward Flyers Volume 1’ features four acoustic band originals alongside a sublime cover of Neil Young’s ‘Birds’. Although one half of Crown Lands; Kevin Comeau (guitars/bass/synths) stated: “We joke around, what if the White Stripes covered Rush?”, in this stripped-back, organic format, Crown Lands recall the mellow vibes of Led Zeppelin III. Maybe it’s the mandolin that does it, or the Plant-esque vocals from singing drummer; Cody Bowles, but you would be hard-pressed not to get a hint of Zeppelin after devouring the five tracks on offer.

‘Howlin’ Back Again’ is a reimagining of previously released single ‘Howlin’ Back’. Packed with copious amounts of acoustic slide guitar and handclaps, the track is driven forward by vibrant percussion work from Bowles. A real toe-tapping, stomping track with a glorious, dreamy mid-section. Try and resist joining in with the handclaps: nope, can’t be done. Likewise, ‘Roving On’ has a thick, irresistible, pounding drum sound which gets the feet stomping involuntarily. With Bowles on the mandolin, and Comeau on a beautiful resonator guitar, this is as earthy as it gets, and the end result is a gorgeous, joyful few minutes of music. ‘The Witching Hour’ (inspired by the Salem Witch Trials) is the longest of the five tracks and delves into “epic” territory. Essentially just a guitar and a djembe drum, the track is boosted by some stunning background arrangements, coupled with ethereal vocals from Bowles, magical and mystical all at once.

The aforementioned cover of ‘Birds’ is two young Canadians paying homage to a bonafide Canadian legend. A beautiful version of an already powerful track which proves that if you are covering Neil Young, then you can go deeper than ‘Rockin In The Free World’ or ‘Needle And The Damage Done’. ‘No Sympathy’ brings this fine EP to an all-too-quick conclusion, the heavy, foreboding piano sound bringing some darkness and weight to what is a light and chilled out collection of music.

Although only two band members strong, Crown Lands are a powerful, visual band onstage. With Kevin Comeau playing a gorgeous Rickenbacker double-neck six-string/four-string combo, as well as foot controlled keyboards, and Cody Bowles sitting high up behind his kit, they are the kind of band that has audiences wondering how only two people could make such a sound. On ‘Wayward Flyers Volume 1’, Crown Lands display a different side to their music. The only question left unanswered is; when can we expect ‘Wayward Flyers Volume 2’?

Previous Introducing: Creatures Of Habit
Next Marcus King Announces ‘Four Of A Kind’