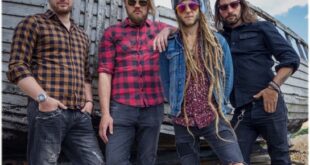 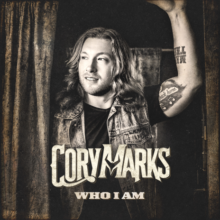 A glance at Cory Marks’ bio and it becomes apparent where the sized-ten stomp featured throughout this, his debut album, comes from. Marks began playing drums at aged ten and like most Canucks he is an accomplished ice-hockey player, meaning he has a knack for heavy hits. It makes sense then that he would ensure any musical product he puts out contains a certain degree of oomph and moments on the album, such as ‘Blame It On The Double’ and ‘Outlaws & Outsiders’, certainly pack a punch or two.

With Outlaw Country/Country Rock on the rise in the UK, it’s the perfect time for Cory Marks to make his mark on the scene, and ‘Who I Am’ certainly does that. Not convinced about his Rock credentials? Then have a look at some of the names that Marks has in his WhatsApp group chat; the aforementioned ‘Outlaws & Outsiders’ features, not only Country legend Travis Tritt, but also Ivan Moody of Five Finger Death Punch and Mick Mars of Mötley Crüe. Then there is the small matter of the go-to gal of the moment as far as guest appearances are concerned, Lzzy Hale, who pops up on the single/video version of ballad ‘Out In The Rain’. Production credits on ‘Who I Am’ go to Kevin Churko, best known for his work with artists such as Ozzy Osbourne, Papa Roach, Five Finger Death Punch, Disturbed, and In This Moment. All of the above would mean jack-shit if the material on offer was inferior and unworthy of the names attached. Thankfully that is not the case with ‘Who I Am’. 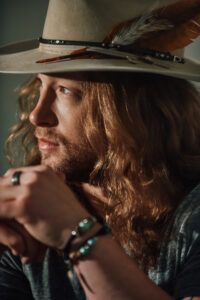 Opening track ‘Drive’ features imagery of one of the top-three Country tropes; the good old-fashioned truck. It’s a jaunty little number that soon gets the feet tapping, a perfect Summery open-road top-down track with shades of U2 running through some of the guitar licks. ‘My Whiskey Your Wine’ pulls the rug out from under the listener, purely because once ‘Drive’ fades out, the impression is that the next track will come in all guns blazing. Instead, Marks dials it down with a simple, gentle tale that oozes authenticity. A lot of artists sat back and watched the success of Chris Stapleton and had their own epiphany to strip the gloss back, meaning several imitations that lacked any substance, ‘My Whiskey Your Wine’, however, passes the litmus test and gets the green light.

‘Devil’s Grin’ is a foot-stomping, head-shaking, raise your glass skywards Friday night anthem. The track is driven forwards by the thumping drum sound and a delicious mix of acoustic and electric guitars, and maybe even a banjo or two? The drums hang around for the knockout one-two punch of ‘Blame It On The Double’ and ‘Outlaws & Outsiders (feat Ivan Moody, Travis Tritt, and Mick Mars)’, a pair of slammers that will have an audience kicking up dust once live gigs return. Fans of 5FDP will especially dig the latter as it’s not a million miles away from what the platinum-selling band is producing today. Special mention to Mr. Mick Mars, one of the truly underrated guitarists in Rock music. We, sir, salute you!

The title-track kicks off “side-two” of the album and is not that far removed from a Black Stone Cherry deep cut. Great pacing, again controlled by the drums which do rattle the teeth loose at times. If ‘Who I Am’ has a BSC vibe, then ‘Keep Doing What I Do’ is AC/DC meeting The Cadillac Three over at Pantera’s house. ‘Out In The Rain’ is a light, dreamy ballad played at almost a waltz-like pace, it works well with Marks on his own here but works even better in the single/video version with Lzzy Hale which is truly something special (check out here).

The mix of Country and Rock on ‘Who I Am’ is evenly balanced and neither genre edges out the other, the Country is not too-Country that it would alienate the Rock fans, and vice-versa. It might need some blinkers to be removed, but once they are off, there is plenty here to enjoy, regardless of where the listener’s allegiance lies.