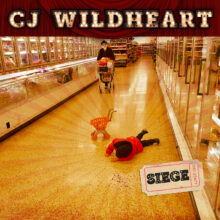 With his first solo album in three years, the ever-likeable CJ Wildheart lights a molotov cocktail and launches it through the window of a shit-filled 2020. Then he lights another, and another, and another. Social media followers of CJ wouldn’t have been expecting ‘Siege’ to be anything but a hardcore, shock to the senses, and it certainly lives up to expectations.

Written during the first period of lockdown where CJ was not only dealing with the madness unfolding around him, but also with isolation from loved ones, and the sheer terror and helpless feeling that came from having both parents in care homes. His social media was an honest insight into his mental state at the time, the anger, and emotions that he was experiencing: and ‘Siege’ is the soundtrack to this turmoil.

‘Siege’ doesn’t hang around and overstay its welcome. It doesn’t even touch the half-hour mark. Instead, it’s a power-packed shot of metal fused with punk: the heaviest album to date from an artist who had had enough of listening to the clowns running the show and put his thoughts into song.

Opening track ‘Peking Duck’ is explosive. A snarling, vitriol-packed few moments (complete with cracking melodies and killer guitar work) that packs more punch than the entire Sleaford Mods catalogue. The difference being that the hipster bunch at BBC Radio 6 wouldn’t give CJ Wildheart the time of day. CJ breaks out some Hooky-sized bass licks on ‘State Of Us’, a fantastic call-to-arms against the state of the world…“We gotta wake up, move to action”, someone has got the soundtrack curator for the next DC movie on speed-dial yeah? For this is truly cinematic insanity. Think Ministry jamming with Joy Division after a few lines of speed and coming up with a new Batman theme song. Light the blue touch paper and stand back.

‘The Ones You Do Not See’ is a perfect example of how to be edgy without losing a sense of melody. Punkier, with fantastic changes of pace, which at times could be primetime Public Image Ltd backed by Motorhead. The playing is incredible, especially the bass rumble. CJ handles all the instruments on the album; with the exception of the insane drum work from Jason Bowld and Ben Marsden from The Spangles helping out with some guitar solos. ‘Charles’ is pure, unadulterated fury: CJ spits out the lyrics ‘Drop the bomb, drop the bomb’ over and over, backed by air-raid siren-like guitars and aggressive backing vocals. Christ, it is an incredible 1.42 minutes. ‘Fruit Loop’ is the sound of a man who has reached breaking point. Anyone who has had to deal with “the social” might recognise themself during this one: “I. Want. You. To. Sign. Here. Do. It. Now. You. Will. Bow” screams CJ in the role of a nameless, faceless, bureaucrat devoid of all empathy. Fucking powerful. As is the full-pelt industrial-tinged power of ‘Iscariot’; where Jason Bowld certainly earns his crust. If CJ knew Trent Reznor back in the day, you might have heard this one on the soundtrack to ‘Natural Born Killers’.

‘TP’ is the shortest of the eight tracks on ‘Siege’ and begins with audio of a news report regarding a fight over toilet paper – remember all those surreal, is-this-a-joke reports? At less than a minute in length, it doesn’t need time to prove its point and neither should it have to. ‘Shit Brick’ ends the album and is a royal FUCK YOU (caps intended) to the current government and all those who played their part in creating the perfect shit-storm of clusterfucks.

‘Siege’ is an album that pisses on every artist who has opted for apathy in 2020. If the idea behind it was to have it serve as a pressure relief valve for CJ, then it seems to have worked. It was either this or CJ going full-on Jack Torrance-mode on the front door at number 10 Downing Street. Essential listening in 2020 really, from one of the good guys.

Siege” is released 11th December and is available to order exclusively from CJ’s website, here.

A digital version is also available to pre-order from Bandcamp, here.