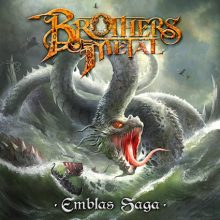 A bit of background on Sweden’s Brothers Of Metal; there are eight members including three guitarists, they place themselves under the genre of “Heavy Metal/True Metal” with their Facebook page stating “Wimps & posers beware, for true metal is here”. And songs from their debut album ‘’Prophecy Of Ragnarök’’ racked up a mightily impressive 25 million streams.

So what did they do with the ten Swedish Krona that the millions of streams brought them? Went back into the studio for album number two, and ramped up the fun factor (as well as the Viking factor), that’s what they did. The end result is ‘Emblas Saga’, part-silly part-historic, but a glorious romp nevertheless. Take ‘Theft Of The Hammer’ for instance; a tale of the God Of Thunder getting robbed…”He woke up in fear and doubt, hammerless and mad…give it back at once you thief, or I’ll go tell my Dad”. Priceless. Or, check out the video above for ‘One’, what’s not to like about a video that portrays a band of brothers only too willing to give another brother a helping hand in his moment of need.

But it’s not all tongue-in-cheek lyrics and jokey promo videos, for underneath lurks a masterful metal album that impresses from the off. The old-school spoken word intro of ‘Brood Of The Trickster’ fades into the war-chants of ‘Powersnake’, and cue the entrance of Ylva Eriksson (aka ‘Voice of the Valkyries’). Along with the growls/”battle cries” of Joakim Lindbäck Eriksson, Eriksson forms a (shield) wall of powerful melodies that will have you scratching your head in disbelief that she is not more of a household name in the metal world. She packs an almighty punch while mixing things up; ‘Hel’ features a gorgeous vocal performance that fans of Sharon den Adel would love, whilst ‘Chain Breaker’ proves that Ylva can handle old school metal in a Priest/Maiden vein, but nothing compares to the stop-you-in-your-tracks ethereal vocals throughout the epic title track. Simply stunning.

There really is something for everyone on ‘Emblas Saga’. The songs are varied enough to keep the listener guessing what comes next, strong elements of power metal, folk metal, symphonic metal and on the rather spiffing ‘Kaunaz Dagaz’; straight up classic metal, complete with a Scorpions-vibe from the three guitarists. The playing is exemplary, especially from Johan Johansson (not just a drummer though as he plays the “Anvil and War Drums”) on full-pelt moments like ‘Ride Of The Valkyries’. The age-old “beauty and the beast” contrasting style of vocals from both Eriksson’s work well, with the growls perfectly complementing the lighter, angelic vocals.

Like Alestorm, Gloryhammer and Nanowar Of Steel, Brothers Of Metal take some of the more po-faced aspects of the genre and inject some much needed humour. The slight tongue-in-cheek vibe lingers in the background and never overpowers the material that Brothers Of Metal have spewed out after a night on the mead – Skal!

Previous BLACK MIRRORS: Unplugged Single/Video
Next MARK MORTON: New Single “All I Had to Lose”