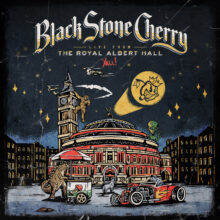 For this reviewer, the first time witnessing Black Stone Cherry live in the flesh was way back in June 2007 when they drew a rather sizeable crowd at one of the secondary stages (a large tent) at Hyde Park Calling Festival for Aerosmith’s remake of ‘Singing In The Rain’. They absolutely stole the show – along with Aerosmith’s thunder – that wet, miserable day. Blame the weather, but Aerosmith dialled it in that day, and even the appearance of DMC for the encore of ‘Walk This Way’ couldn’t save the day. Black Stone Cherry though, jeez they were like a blur as they attacked that small stage. They might have popped their UK cherry (sorry, not sorry) previously with Hinder, but it was that early afternoon slot in London that signaled the beginning of a special relationship with these shores – a relationship that shows no sign of abating.

Skip forward a few months to October 2007 and the same reviewer is crammed into the Cathouse, Glasgow for BSC’s maiden voyage North of the wall, and the place is going off. BSC drummer John Fred Young constantly hits his head on the low ceiling as he keeps on jumping up from his drum stool, and the Tasmanian Devil known as Ben Wells has broken his 10,000 steps-a-day target by the end of the first song. Ninety minutes later and there could not have been one person in that cauldron-like atmosphere who did not think that this young band was destined for greater things, as well as a lengthy career. Fast forward a few decades to Wednesday 29th September 2021 – the year of the band’s 20th Anniversary, and Black Stone Cherry is playing at the legendary Royal Albert Hall in London, and suddenly, all is right with the universe again. 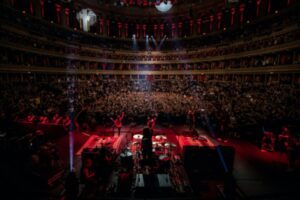 Released on multiple different formats (the BluRay edition forms the basis of this review) ‘Live From The Royal Albert Hall…Y’All’ is a testament to how far a strong work ethic and a kick-ass catalog of songs will get you. It’s also a testament to the importance of creating a relationship with your fanbase, and maintaining that relationship over the decades, and the end result is an emotion-packed few hours that highlights how much Black Stone Cherry means to a UK audience – and vice versa. Beginning with a heartfelt dedication to BSC frontman Chris Robertson’s late father who sadly passed away a few months before the gig took place, the footage opens with a shot of a misty-eyed Robertson gazing at the venue, talking about how much it means to him to be playing here, he then turns to the camera and states: “We’re going to royally rock this motherfucker this evening, you better believe that”. John Fred Young counts the band in on opening track ‘Me & Mary Jane’ and the crowd does indeed go wild. 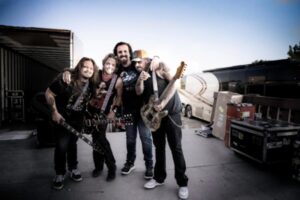 Having seven albums worth of material at their disposal, Black Stone Cherry must have had some headaches in putting together a setlist, and ‘Live From The Royal Albert Hall…Y’All’ has something for everyone. Album number seven ‘The Human Condition’ serves up total bangers such as ‘Again’ and ‘Ringin In My Head’, earlier material such as ‘In My Blood’ from 2011’s ‘Between the Devil & The Deep Blue Sea’ still pack a punch years later and top marks to the lightning engineer on this one for lighting up the hall in red, white and blue, and kudos to the camera operator who caught the killer shot from behind John Fred Young’s kit just as the hall lights up. Good work people, especially since this was one of the first tours back after the lockdown. The debut album from 2006 is represented by a rabble-rousing version of ‘Lonely Train’ and the always-thrilling ‘Hell and High Water’ which comes complete with early footage of the band as teenagers, and includes a Dexter Holland-looking Robertson, as well as John Fred Young scarily looking like a young Adam Sandler! 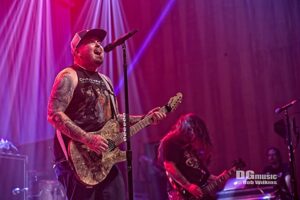 Interspersed with the live footage is some behind-the-scenes footage that includes; shots from pre-production for the tour that this gig featured as part of, equipment issues that caused some headaches for Robertson especially, footage from opening night of the tour (including a ticket tout plying his trade…) some background on how the pre-show karaoke/jukebox session came to life, and really look out for ‘Yeah Man’ which features footage from every show on the tour. Concert footage is always great, but it’s the fly-on-the-wall stuff that is always magical – Chris talking about the special bond between him and his father, whilst playing his father’s guitar, is lump-in-the-throat time. New bassist Steve Jewell Jr in flip-flops is a sight to behold, but thankfully he doesn’t opt for white socks to complete the look! 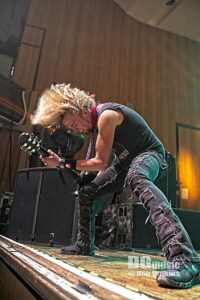 Ben Wells hasn’t cooled his jets in the years since the UK debut in 2007 and at times it is dizzying watching him as he high-kicks, skips, and crisscrosses the stage hellbent on making eye contact with everyone in view. With the stage clutter-free and unobstructed, he makes sure that no one feels left out and there is some great early footage of punters in the wings smiling like loons as Wells brings them into the game. 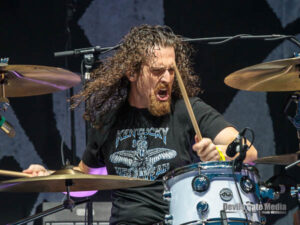 As mesmerizing as Wells is to watch, it is pretty damn hard not to be hypnotized by the incredible drum work from Animal behind the kit; aka John Fred Young. With a mass of flying curls and twirling drumsticks, he is putting on the kind of show that should see him mentioned in the same breath as other famous players such as Ginger Baker who have graced the RAH stage. Steve Jewell Jr has slotted in seamlessly and brings the bottom end in style, as well as proving to be quite a visual performer, but let’s be honest here, one does not simply play with Black Stone Cherry and stand still. Chris Robertson? Well, he is in inspirational form. Considering the emotions that must have been running through his head (you would have to have a cold heart not to be moved by the heartache on show during a spine-tingling version of ‘Things My Father Said’), he puts in a career-defining performance and when towards the end of the show he says that these live shows “…have been the most therapeutic thing that I’ve got to do in my life….” then you know it is straight from the heart.

An incredible record of a (well-deserved) historical evening that will long live on, the last word should go to Chris Robertson: “…we never said if, we said when…”

All other live images – Rob Wilkins