Review: Beyond The Black – ‘Hørizøns’ 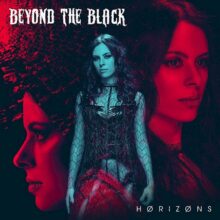 With the release of ‘Misery, German symphonic metallers Beyond The Black knew that they were going to ruffle more than a few feathers. Hence it was the first new music from studio album number four; ‘Hørizøns’, to be released. Quite a bold statement of intent really. In essence ‘Misery’ is what is commonly known as a “banger”, or looking at it another way: a red flag to keyboard warriors everywhere. ‘Misery’ is loud, energetic, and good fun. It has a light poppy feel, it also has guitars and loud drums, and a ridiculous earworm chorus. Is it symphonic metal? Nope. Is it enjoyable, and one of those moments where you can imagine a drunken festival crowd bouncing along to it in a soggy field? Yes, absolutely.

‘Hørizøns’ does still feature many symphonic moments, just not as bombastic as fans of the genre might have preferred. Tracks like ‘Human’ feature impressive orchestrations that enhance the song. In the case of ‘Human’ it’s more of a gentle, sweeping orchestration, while the bombast comes via the always-impressive drumming of Kai Tschierschky. The arrangements offer up an alternative “for your consideration” hint to the Bond producers, should they realise that the Billie Eilish 007 theme song is a tad dull. In places, ‘Marching On’ and ‘You’re Not Alone’ also tread the symphonic route, with the latter being especially memorable thanks to the uplifting we’re-in-this-together call to arms.

With ‘Hørizøns’, Beyond The Black have grown their sound to encompass more of an overall modern hard rock sound. The difference between this and Within Temptation’s most recent album; ‘Resist’, is that Beyond The Black have not forsaken guitars in favour of an electronic sound. Chris Hermsdörfer and Tobi Lodes can both be heard quite clearly, and there are oodles of guitar solos from Hermsdörfer to devour. Although vocalist Jennifer Haben is the sole original band member, this line-up has been together for four years now, and it’s starting to show. The band seems more direct, something that is reflected in moments like the electronic-driven ‘Some Kind Of Monster’, and the bombastic (and instantly memorable) ‘Golden Pariahs’ which is powered by slick work from Kai Tschierschky and his partner in crime; bassist Stefan Herkenhoff.

Highlights on ‘Hørizøns’ are numerous and lurking round every corner; the powerful title-track; a delicious duet with Amaranthe’s Elize Ryd in the shape of ‘Wounded Healer’; the punchy ‘Golden Pariahs’; the sheer vibrancy of ‘Paralyzed’; and the stop-you-in-your-tracks ballad ‘I Won’t Surrender’ which features a guest appearance from cellist Tina Guo. Hell, even ‘Misery’ (the track that launched so many harsh comments upon its release) is a highlight, with hooks big enough to get someone who has been in lockdown mode for three months finally up off the couch.

Beyond The Black is ultimately Jennifer Haben’s baby, and she hasn’t let any pressure drag her down. Her vocals have grown stronger with each release, and her confidence will have been boosted by appearing on German national TV as part of the ‘Sing My Song’ show. Sidebar – Germany gets Jennifer Haben, Holland gets Floor Jansen, and the UK gets Gary sodding Barlow. Something not quite right about that. ‘Hørizøns’ is a fantastic album, it’s positive and has great balance to it, this new path that Beyond The Black are venturing down really suits them.

Previous Introducing: Liquid State
Next DEE SNIDER: New Video – I Am The Hurricane