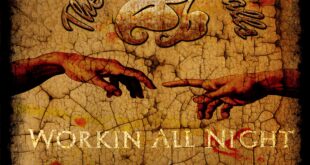 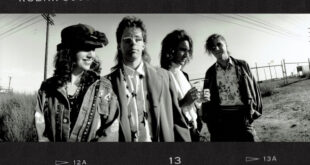 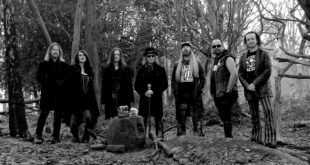 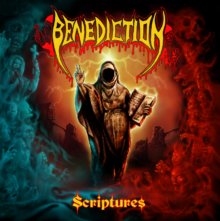 It’s been 12 years since Benediction’s last outing “Killing Music” but finally these legends of British Death Metal make a welcome return with their latest release, and eighth album, “Scriptures”. In an interview last year at the NOAF festival guitarist Peter Rewinsky described the thought processes behind going into the studio: “When we wrote the album we sat down and we thought right we’re gonna want to write an album that’s proper old school that was like written 20-30 years ago and we set out to do that. I think we really achieved it. When people hear it that’s what I want people to say…I want people to go ‘oh my god you can’t get more old school than this’.”

The first thing that struck me before I even listened to ‘Scriptures’ was the outstanding album artwork. It’s very much a reflection of the bands goal to go old school. I remember back in 1992 picking up my first Benediction record in the form of “Dark Is The Season” and loving the almost Stephen King-esque art. While their last few album covers were fine I’m really happy to see they’ve returned to the colourful artwork that is so reminiscent of their earlier material.

While founding members, and guitarists, Darren Brookes and Peter Rewinsky return for this release the rest of the line-up has completely changed since the last album. For bass player Dan Bate and drummer Gio Durst this will be their first Benediction studio recording. Vocalist Dave Hunt decided to take time away from the band to finish his PhD, and while this may make fans of the band a bit anxious, they needn’t worry as singer Dave Ingram (who was in the band from 1990-1998) has stepped back into the fold to deliver some killer vocals.

Like previous albums, Benediction isn’t about blazing speed and blast beats. There aren’t any crushingly slow songs either. The band occupy more of a mid-tempo feel throughout although there are some speedier numbers such as opening track “Iterations of I”, “Rabid Carnality”, and “Embrace the Kill”. Everyone in the band delivers a stellar performance. Drummer Gio Durst knows just when to increase the intensity and when to pull it back. Bass player Dan Bate showcases his playing in songs such as the mosh inducing “In Our Hands, The Scars”, and the crushingly heavy “Tear Off These Wings”, where his playing comes to the forefront. I’ve seen a few YouTube interviews with singer Dave Ingram, I’ve also listened to some of his radio shows, and I’m always surprised by how this jolly personable cheery character, who has the kind of speaking voice that wouldn’t be out of place hosting the Beechgrove Garden, can produce such an aggressive growling onslaught. Unsurprisingly the guitars sound awesome too and carve an unrelenting path of punk and death metal destruction through the entire album. A highlight for me would be “Stormcrow”. I’d love to hear this one live. It has the kind of almost Anthrax-esque moshy feel that would just cause chaos in the pit.

Scott Atkins, who’s previously worked with bands such as Cradle of Filth, Behemoth, and Gamma Bomb amongst others, handles the production duties. He’s done a great job of getting the best out of the band and produced an album true to their sound where every instrument is clear yet still full of chaotic energy.

Benediction have shown that even after more than 30 years they can still produce the goods. This is probably one of the best Death Metal releases I’ve heard this year. They’ve also managed to record one of their strongest albums to date. They wanted to create an old school sounding album and they’ve succeeded admirably. A very enjoyable outing from these stalwarts of the British Death Metal scene. Since the band want people to say it: “Oh my god you can’t get more old school than this”. 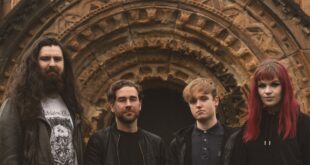 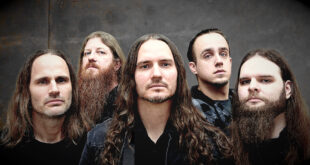 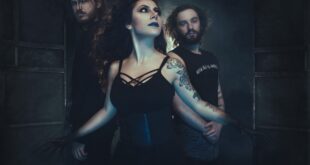