Review: Attic Theory – ‘The Sign Of An Active Mind’ EP 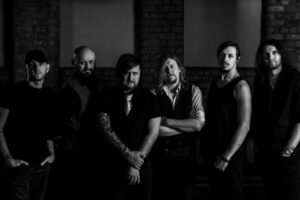 Liverpool-based Attic Theory formed from the ashes of three different bands, and the sextet (three fucking guitarists – oh my giddy aunt!) are beginning to make a name for themselves as a band to watch out for. The kind of band to get on board with when gigs return and while you can still catch them in the local dives of the UK Rock circuit: while Academy-sized gigs will struggle in 2021, the small grassroots gigs will thrive come Springtime – enough of them negative waves, be positive folks!

The arse end of 2020 was made more tolerable for the band when ‘The Sign Of An Active Mind’ was voted ‘EP Of The Year’ by the members of the influential Facebook group ‘New Wave Of Classic Rock’. Add-in the fact that Attic Theory were crowned ‘Best New Band’ at Planet Rock Radios ‘The Rocks 2020’ awards, and 2020 has been less-shitty than most for the band. With word-of-mouth growing by the day and accolades up the yazoo, is ‘The Sign Of An Active Mind’ worthy of such attention? The answer would have to be a resounding YES (caps intentional).

The main focal point with Attic Theory is the powerful vocals of Lewis Wright. On the right side of aggression; not too harsh, not too light. Just right. Comparisons are quite hard to make and it’s easier to say who he doesn’t sound like: he doesn’t sound like either of the two “go-to” influences for so many young vocalists today – Myles Kennedy and Chris Robinson. Instead, he offers up equal amounts of melody, grit, and power, and on tracks like the powerful opener ‘Marionette’ – all three together.

As you would expect from a band with three guitarists (Tim Cunningham, Peter Donnelly, and Matt Lawler) the playing is fierce and fiery, while showing restraint by retaining a sense of melody; the afore-mentioned ‘Marionette’ has some nailed-on Thin Lizzy-esque melodies, but with a real hint of modern-day venom; ‘My Own Design’ has some killer grunge riffs in a Soundgarden ‘Spoonman’ way, or even Chris Cornell tackling Bond on ‘You Know My Name’; ‘Doesn’t Matter’ and ‘Saints Amongst Us’ have more of a metallic edge to the playing which thrills the louder it goes. The tones that Cunningham, Donnelly, and Lawler coax out of their respective axes are incredible. As is the stellar work from the backbone of the band: Matt Simon on drums and bassist Kenneth McArthur. Check out the subtle percussive work, and pulsating bass lines going on in the background of tracks like ‘Your Light’ – magical.

Attic Theory display best-of-both-worlds qualities: they aren’t really classic rock in the terms of what you might consider “classic rock” to be (Thunder, Free, Rainbow, Whitesnake, etc) but they have enough melodies to keep classic rock fans happy. They also have an alternative, modern edge, which wouldn’t sound out of place in the amphitheaters of America at a festival like ‘Rocklahoma’ on the same bill as acts like Shinedown, Seether, Breaking Benjamin, or even Tool for that matter. Except Tool would never play a festival like ‘Rocklahoma’.

Well written, well played, and expertly produced, ‘The Sign Of An Active Mind’ is available here. Did we even mention that this is the debut EP from Attic Theory? No? Well, it is, and it is indeed something special.