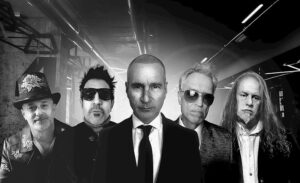 25 years in the making, Panic Boom releases “Revolution”. “Revolution” is the first single off of Panic Boom’s self-released full-length debut album. Panic Boom is scheduled to be released in the spring of 2022.

This band of brothers was formed in 1994 when drummer Phil Varone parted ways with Saigon Kick setting out to form a new group.

Boom’s songwriting was immediate as they entered the recording studio to begin recording songs for Atlantic Records. Atlantic would eventually pass on the band, and each member would go onto other projects. The band would never break up, with Panic Boom, you are a member for life. The members call it “The Hotel California of bands.”

After twenty-five plus years dormant, Panic Boom began showing signs of activity when Varone called each bandmate asking if they would like to re-record one of the original songs for his new documentary, 30yrs a Drummer. What happened next was something no one saw coming. One song, turned into two songs, then three, then four and before long; Panic Boom had recorded a full-length album, of brand-new songs, mixed with the old songs.