Nightblade: New Single ‘Hope To Be There’ 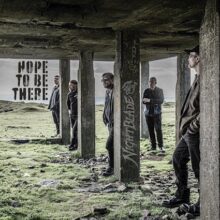 Relentless Brit rockers NIGHTBLADE unleash their third album in an incredible three years. The bountiful riff slingers drop their fiery new album, Hope To Be There, on Friday 9th September. The record is heralded by a brand-new single and video, Hope To Be There, which is out now.

Continuing to go from strength to strength, the unrelenting rock crew, Nightblade, will now complete an unprecedented trilogy of albums when they unveil their stunning new album, Hope to Be There. The first of their triple-pronged, relentless rock revelation came in 2020 with the release of Ignorance Is Bliss, and then 2021 which brought us Unknown Territories. Even the recent global pandemic-enforced downtime could not stem the tide that is NIGHTBLADE’s creative flow.

To date, plaudits have ensued for their last two albums with Powerplay Magazine, Kerrang! Radio, HRH Magazine, RAMzine, ERB Magazine, and Fireworks Magazine, all offering their key backing. The band have also secured strong support from many renowned websites such as Maximum Volume Music, Moshville, Rock N Load Magazine, and Metal Temple, to name just a select few. The persistent rockers’ new album, Hope To Be There, is anticipated to even surpass the broad acclaim received for their previous endeavors.

“We are proud that ‘Hope To Be There’ is the fitting end to the trilogy,” says vocalist Mark Crosby. The new record is undeniably the highlight of a striking series of albums and will certainly spawn a raft of singles. Boasting twelve tracks, the output of this album was fast and furious, and with the addition of guitarist Chris Seldon, the band have a new edge, and a different dimension. Crosby goes on to add: “In true Nightblade style, it’s a diverse album. We thrive on that ‘keeping everybody guessing’ element, but the record still has a real cohesion to it.”

NIGHTBLADE will play a number of dates in support of the album; look out for further announcements via their social sites.