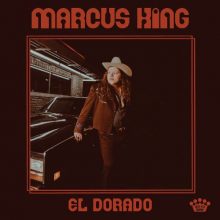 Marcus King has shared an acoustic video performance of his song ‘Wildflowers & Wine’ via Billboard. The song features on his hit debut solo album, El Dorado, which has topped multiple US charts since its release in January.

Produced by The Black Keys’ Dan Auerbach, the record was released via Snakefarm Records / Fantasy in the UK to widespread critical acclaim.

The ‘Wildflowers & Wine’ video was recorded in Dan Auerbach’s Easy Eye Studio in Nashville, and features a performance of the song showcasing King’s soulful vocals, backed by Auerbach plus studio legends who played with artists from Aretha Franklin to Elvis.

Discussing the video with Billboard, King stated, “It’s not the exact set-up we used, but all the instrumentation on that track was played live together as a cohesive unit and not overdubbed. That’s what gives it that taste, that live feel”. He added, “It was a lot of organic steps that all came together in a kismet way for the record to work. Having those cats work with you was a tremendous opportunity in itself… It’s still playing and singing, but in a different kind of environment, and to have these cats to look up to.”

El Dorado, a contemporary exploration of southern R&B, country-soul, classic rock and blues, has established the 23-year-old phenom as one of the most soulful voices of his generation. King’s arresting vocals feature as the lead instrument, taking centre-stage alongside a genre-bending blend of subtle acoustics, bright pedal steel, raucous electric guitars and blistering solos.

The album debuted at #1 on both UK & US charts; in the UK, it topped the Americana Chart, whilst in the US the Americana Folk, Top New Artist, Current Rock, Blues Albums, as well as #12 on the US Top Current Albums chart. King also recently made his debut on Jimmy Kimmel Live! and was featured on NPR’s Weekend Edition and Fresh Air, alongside support from Rolling Stone, The Sun, Mojo, Uncut, NPR Music, Classic Rock, Planet Rock and more.

King is set to perform at the Love Rocks charity event at the Beacon theatre in New York on March 12th, alongside a stellar line-up including The Black Crowes, Dave Matthews and Jackson Browne. King will also open for Chris Stapleton on his All-American Road Show with US dates including Madison Square Garden in New York.

Currently on his solo world tour with his band, The Marcus King Band, they will be starting their run of UK dates this week. See full list of dates below.

“King is the complete package. Retro-styled yet forward facing, he plays searing blues guitar, delicate acoustic country and sings like an angel with buckets of soul… Is 2020 set to be his breakthrough year? You betcha!”
The Sun

“King has the voice and song-writing chops of a man twice his age. Buy this record”
Planet Rock

“He used to be an insecure outcast. Now the guitarist is introducing southern rock to a
new generation”
Rolling Stone Magazine

Previous The Rocket Dolls – New Video “The Grip”
Next Interview: AJ Channer – Fire From The Gods