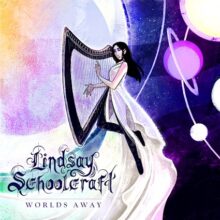 Though coronavirus has forced us indoors, music still flows. In the case of Canadian multi-instrumentalist Lindsay Schoolcraft, she chose to look back on her gothic metal past and reimagine it in an entirely new light. She has lent her talents to an astounding variety of bands, ranging from Cradle of Filth’s extreme metal to Mary and the Black Lamb’s alt-rock, as well as leading her own project. Last year she released her début solo album, Martyr, which received a Juno nomination in the category of Heavy/Hard Sound Album of the Year.

This year’s project, however, is a different entity. Lindsay has made no secret of her love of playing electric harp, which she has combined with string arrangements for a completely different take on her discography. The result -Worlds Away. Here, she reunites with collaborator Rocky Gray (original drummer of Evanescence, who co-wrote Martyr). His subtle electronic beats add a cinematic tone, such as on “Stranger”, or thundering on album closer “Warn Me”. The lilting harp and strings, meanwhile, concoct a fantasy soundtrack atmosphere akin to Loreena McKennitt or Sarah Brightman. Each instrument vies for attention, creating various moods: “Where I Fall” is a strings-driven dark-pop ballad, whereas the harp-tinkling Masquerade indulges in musical theater.

Most of the tracks draw from her previous works, but there are two unfamiliar faces. The title track opens the album with Lindsay’s breathy vocals accompanied by her harp. Her singing is a highlight of this record, especially when ascending into the upper echelons during stunning choruses such as on “Fading Star”. Many critics have compared her emotive voice to the likes of Sharon den Adel or Amy Lee. The other, “Dance on the Strings”, signifies the final completion of a song that had been sitting in her lyric book for over a decade. It deals with toxic manipulation, and the dark strings in the song feel analogous to the strings the narrator can see are controlling the victim.

This record may be worlds away from what you know of Lindsay Schoolcraft, but that works to its credit. The songs sound vibrant, and it is impressive that without listening to the original versions, one would never be able to tell these were re-workings. Worlds Away is simply beautiful and calming, and an excellent way to unwind in these challenging times, while appreciating the talent that has gone into it.

You can pre-order the album via Indiegogo on CD, vinyl or digitally: http://igg.me/at/harpalbum

7. Dance on the Strings