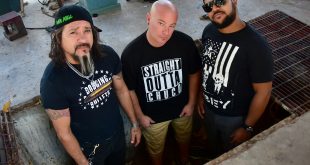 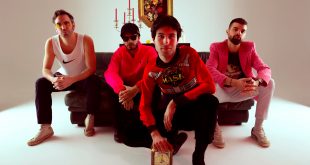 If you were lucky enough to secure a ticket for the recent sold-out tour from Those Damn Crows, hopefully you got in early enough to check out Tribeless, another young, up and coming band from Wales making people sit up and pay attention. Here guitarist Latif Bryant gives us the lowdown on all things Tribeless related, as well as how surreal it was to play Cwmbran Rocks with Skindred. 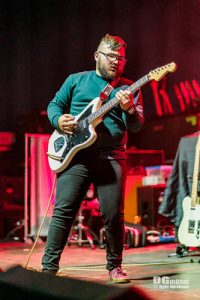 The three of us having been playing together for just over a year. We can all thank online site, Join My Band for our gradual formation. Myself and Max (Max Rhead – drummer) met through it and played together in various incarnations of the band for a while. We turned back to JMB in the hope of finding a singer who ‘got us’. Lightning struck twice when Lydia (Lydia McDonald) came along.

We had all played live before, but we felt good about what had happened in the rehearsal room with Lydia and we really wanted that to translate seamlessly into a live situation. Therefore it was pretty nerve racking! For a start we hadn’t played live for a while and on top of that we were making our debut in a biker club! It could have felt intimidating but the crowd were so welcoming. It was pretty joyous to be honest

It must have been a huge buzz performing at Cwmbran Rocks with Skindred? How big was your guest list?!

It was simply amazing. A bit surreal. We’re all massive Skindred fans and to get the opportunity to play with them fairly early into this wasn’t lost on us – at all. The stage was huge, but you have to step up if you’re serious about this. Benji (Webb – Skindred’s mercurial front man) came into our dressing room afterwards to congratulate us. He said Lydia had ‘top pipes’ – this is properly confidence boosting stuff. He congratulated me on my name! He’s such supporter of new music.

Our guest list was pretty modest – it was Benji’s to fill and he knows A LOT of people in that area! He’s the don.

The short answer is alt-rock. I like to think its cinematic sounding alt-rock – light and shade, we can go from delicate verses to huge chorus’. Electronic elements play their part amongst the riffage and melody. Influences range from Biffy Clyro, Arcane Roots, Thrice, Linkin Park to PVRIS and Tonight Alive. 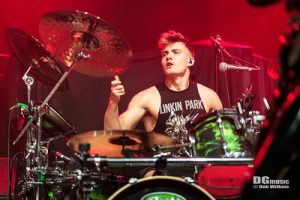 The new music scene is bursting at the seams with fresh talent, what ways do you feel a band has to stand out from the others trying to build a name?

We’re just trying to be ourselves. We’re constantly trying to refine our sound. If you want to stand out as a band you’ve got to have songs that go beyond being good and performances that do them justice. We’re just working hard – writing as much as we can, making it as good as we can, going back to the drawing board and starting again when necessary. Ultimately we are trying to be the very best version of us.

Our debut EP ‘Gravity’ is out right now on all platforms. Please go and listen! We’ve demoed a further 10 tracks recently – we’re excited about some of the stuff that’s come out of that. So there’s plenty to come.

You have of course been opening for Those Damn Crows, but what band out there at the minute do you feel that you would be best suited to open for?

We’ve got so much to thank the Crows for. What we’ve learned opening on that tour – the confidence it breeds, the application it takes, the lessons you take from a band who is riding the absolute crest is just gold. We couldn’t have asked for more. So we’re pretty pleased with that currently. One day if you told me we were just about to hit the road with Biffy, you’d be peeling me off the ceiling. Ultimately though, we just want to go out and play great shows.

Who do you feel is the next band to break out in the way that Massive Wagons recently have?

Well, as of writing this, I think you need to look no further than Those Damn Crows…And it’s richly deserved. Brilliant songs, incredible live and yep, beautiful people. 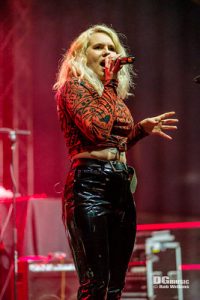 For Lydia it was discovering Paramore via Sims! Max, he’s heard music all his life. He started playing drums at such a young age, it’s all he’s really known which is pretty cool. For me it was watching my friend, David playing guitar in Ireland…It wasn’t a record, or a live gig, that came later. It was definitely Dave and his playing – it blew my mind.

Myself and Lyds saw In Dynamics recently. All of us saw Sevendust smashing it up in SWX in Bristol a while back. The last gig I went to was Vukoui in Cheltenham.

Lyds has ‘Manic’ by Halsey -I don’t know if its such a surprise, she likes a lot of different stuff. Max has a lot of Limp Bizkit – Chocolate Starfish is always getting an airing. Me, what about ‘Dawn’ by RY X

Whose return are you most excited about…My Chemical Romance or Hayley Williams? Or neither?!

HA! Definitely both. But we really, really love the direction Hayley is going with her stuff. Good vibes!

Gig, travel, sleep, repeat…It would be nice to make it back to the studio as well at some point this year.

Previous Me And That Man: ‘By The River’
Next Review: The Three Tremors, Edinburgh