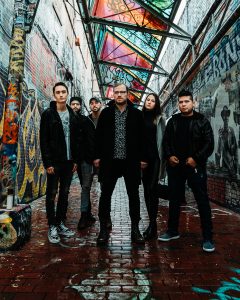 Spearheaded by two Russian-born vocalists, Boston-based band Major Moment has come from distant parts of the world to form a true modern alternative rock band. Here’s the lowdown on what you can expect..

What are the origins of the band, and how long have you been playing together?

MM: Major Moment was formed just under two years ago, but we’ve all been involved in music making or music related activities throughout our lives. What immediately separates us from many other bands is that we all come from different parts of the world: two different regions of Russia, Guatemala, and, of course, the US. Each member brings their own influences, which makes our sound interesting and unique.

How did you feel performing your first gig, and how was it?

MM: It was stressful, but mostly for technical reasons. Our current gigs still are sometimes; we have quite a complicated setup and are still getting used to it while tweaking and improving it pretty much constantly, so there are a lot of variables in place. Our goal is to create an experience that sounds as good as the album, while performing as much of it live as possible. This is a challenge in itself, because when we’re in the studio our projects tend to easily run to over 100 tracks, with multiple layers of guitars, synths, and vocals. Six people can only play so many things at the same time! We’re also accountable for not only how it sounds, but also how it all looks live, and stage presence has to be on point so the audience is engaged and feels like a part of what’s going on. Every single show gets better and better, but we still feel like it’s a work in progress. A huge project for this year is to add stage lights and special effects to the visual side of the show, along with certain other stage elements.

As far as how our first show went, we had to supply our own FOH system, our own stage monitors, and Andrey (our vocalist) also ran the sound from the stage, so you can imagine the pressure. In the sound rack, a power cable came loose in the EQ that was in the chain, so it wouldn’t let any sound pass through. We realised there were no audible vocals during our first song, so there were a couple of minutes of very awkward silence while we tried to figure out what was happening. We couldn’t do it fast enough, so we had to be creative and basically turned the stage monitors to face the room (it was a small room, obviously). The show went on and it was pretty good, keeping in mind it was our first one. We’ve called it “Slightly Unplugged” ever since.

What should people expect when they check the band out? How would you describe yourselves?

MM: We’re a modern rock band with a cinematically rich sound that combines music influences from East and West, where heavy guitars meet delicate harmonies, and punchy acoustic drums are supported by electronic elements, such as drum machines, samples, and synths. Led by two Russian born vocalists / songwriters (a husband and wife) who met and were united by their love of music, we are on a mission to inspire people to be their best selves, pursue their dreams and live a life of purpose.

The new music scene is bursting at the seams with fresh talent. In what ways do you feel a band has to stand out from the others trying to build a name?

MM: Short answer – in any, as long as it works.

Long answer – these days in the music business we feel it’s all about the balance between the creative side and work ethic. Long gone are the days when drugged up rock stars would show up hours late to meetings with their labels, and would be no shows to their own gigs. In today’s world, for the first time in history the DIY scene not only has a fighting chance for the audience, but currently has more successful acts than labels. Artists need to become business people, whether they like it or not. They must learn many skills and perform many tasks that labels and their teams were previously responsible for. It has its pros and cons of course, but that’s the only way to be successful nowadays.

What are you currently working on that people can check out?

MM: We are actively preparing to release four new singles this Summer, and working on music videos for a couple of new songs. We’ve just had a live set filmed for a local TV station, which you can check out on our YouTube channel and Facebook page. We hope to get back to playing shows in late Summer / Autumn; we had a couple of big festival appearances scheduled, so we’re still hoping to rock this year!

What band out there at the moment do you feel that you would be best suited to open for?

MM: We’d love to one day be the support act for bands such as STARSET, Bring Me The Horizon, Nine Inch Nails, PVRIS, Thirty Seconds To Mars, I Prevail. We share a lot of the same influences, and a lot of people who like our music also like those bands, which is a recipe for a spectacular show! 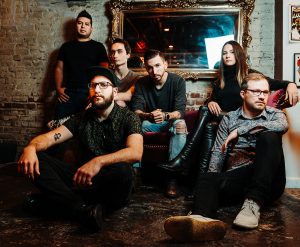 Which band do you feel is the next likely to break out?

MM: It’s a great relatively new band called Major Moment. Lol. Not our words! This is what New Fury Media said when they reviewed our music video for “May Leave Scars”: “We’ll just say this: Major Moment is a band with a high chance to break out. Their vocal melodies are very easy to like, and with high appeal to the average music fan, it would be a surprise if this wasn’t a song you put on repeat for a while.”

You know… we believe them!

What are your first musical memories? And what was the light bulb moment that made you go “I want to do that?”

MM: I think for each of us it was a moment (a major one, indeed) in our childhood when we listened to a song that made us not only want to receive this energy, but give it back to people who might feel the same way. Music is such a powerful thing. We can overcome so many problems and fears with music, it also makes happy moments even happier. Music is a therapy, we absolutely need it to stay connected with our own feelings and goals, especially in the modern world where everything happens so fast. By expressing ourselves through music, we would love to help someone else to be(come) better.

MM: Oh, wow, it’s been a while for some of us, haha. Sasha attended Mike Shinoda’s show in Boston two years ago, which was amazing but also bittersweet, in terms of the tragic death of Chester Bennington; that deeply affected all of us. Andrey and Sasha went to see both Liam and Noel Gallagher in New York around the same time earlier that year. In August last year, Daniel (rhythm guitarist) saw Hawk and Veil of Maya in Worcester. Eddie (lead guitar) attended Vein and Higher Power in Cambridge last October. Xanon (drums), being the most original one, he went to see J Balvin last November in Boston.

See? That’s what we mean about different influences! Lol. We love going to shows but now the perspective has changed a little as we pay more attention to the technical side of things, rather than just enjoying the music, haha.

What is the album that you have in your collection or Spotify playlist that would surprise most people?

MM: Oh, great question! We feel like through someone’s favourite music you can learn a lot about the person. For that reason, we came up with a separate playlist from each band member with their recent favourite songs. I’m sure you will find a lot of surprises there; go check it out on our Spotify page! We’d also love to hear back from you what you think about them, who you can relate to more. Anything you want to share with us, we always communicate with our fans!

MM: Now that everyone’s plans have been mostly destroyed by the current pandemic, we’re still trying to remain on our release schedule.
We think that we can. We also had some incredible live shows and festivals planned for later this year and REALLY hope that we will be able to play them and meet our fans in person! Let’s just #staythefuckhome and get this virus over with faster.

MM: We’re VERY active on social media, talking to our fans on a daily basis. Facebook, Instagram, and YouTube are the top three. We love hosting live chats and will be doing it again sometime soon! We love hearing back from you, reading your stories, feedback, whatever our music makes you feel. So drop us a line, and stay connected!