Liverpool-based duo Little Triggers, Tom Hamilton (lead vocals & guitars) and Jay Radcliffe (drums & backing vocals), are not-so-quietly building up a head of steam in anticipation of the release of their new single ‘Burn’, which you can stream the shit out of from August 21st. With both Planet Rock Radio and Classic Rock magazine onboard, now is the perfect time for a little introduction to Little Triggers. 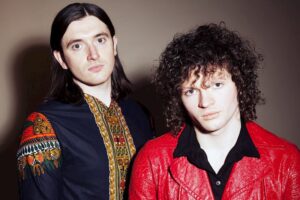 Little Triggers emerged from the ashes of Tom Hamilton’s teenage outfit The 45s. They signed an $800,000, three-album publishing deal with Primary Wave/BMG but, under pressure from school and parents the other band members pulled out. Tom went off to Liverpool to study music and formed his new band there at the end of 2016. Following the usual line-up changes, Tom and Jay have been playing together for over two years.

The band changed to a duo in late 2019 and played our first gig in Bristol in early December. we didn’t tell the promoters and they were a little shocked when we turned up. Soundcheck went fine and the support act did a great job warming up the crowd. From the first bars of the first song, there was a moshpit going on. They loved us and the promoters invited us back right away. We were reviewed as making the BIGGEST (their caps) sound two people can make.

We are definitely a Rock band but wouldn’t use any of the tags describing all the sub-genres. Fans have described our sound as Garage Rock but we can be quite heavy too.

New single ‘Burn’ is set for release on August 21st, how quickly did the track come together?

We went into the recording studio with three songs which we had rehearsed in our practice room. Working with our producer, Al Groves, in the Motor Museum studios in Liverpool, we spent a couple of days taking parts of all of the songs and creating something new. We hadn’t worked like that before and it was a great creative experience.

The single had its world premiere on Planet Rock Radio, how did this come about? Had you approached the station yourself, or was it word of mouth?

A bit of both really. Wyatt Wendels had played a previous single, ‘So Fine’, five times on his show so was aware of us. But we then approached him with the new song and we are delighted he has now chosen to play it twice and maybe more by the time this is published!

It’s about the whole package. Of course, the music has to be great but you have to look good too. Then the whole operation has to be professional. You don’t have to spend a fortune to do that, just make sure you are doing the best you can. That will be seen by the industry positively. We can’t tell you the number of bands who just don’t put in the effort. 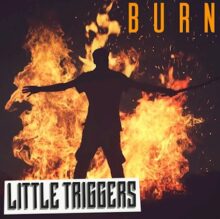 The new release BURN will be out on 21st August along with a cool lyric video and then a full music video that we shot in a TV studio in Liverpool. For fun, we also have a homemade video cover of The Beatles ‘And Your Bird Can Sing’. It’s on Facebook and YouTube. We’ve also done a similar thing with ‘While My Guitar Gently Weeps’ and that will be on YouTube and Facebook as well.

Rival Sons would be good or The Black Keys.

Red Rum Club from our hometown are doing well at the moment with their latest single all over BBC Radio 2.

For Jay, it was listening to music in the car as a kid going to France on holiday. Nirvana came on and he wanted to be Dave Grohl. For Tom, it was watching a Beatles tribute band at a festival and then discovering that one of the band had played a Beatle in a film. He wanted some of that!

Debut album ‘Loaded Gun’ came out last year, what are your thoughts on it nearly a year after it came out? Have you revisited it at all?

We play several of the tracks in our live set but other than that no we haven’t. We do wonder what an orchestral version of So Fine would be like, something like the 1812 overture maybe.

The band has already featured on the Classic Rock Magazine cover CD, not once but twice, that must have been a huge thrill?!

It was good going down to the local Tesco and seeing our name on the cover.

Who would you class as the ultimate two-piece band?

For Jay, it is Death From Above 1979 and for Tom a toss between The White Stripes and Black Keys.

Were you celebrating when Liverpool won the league? Or are you still in the denial stage?!

That’s a very funny question. Jay is an Everton supporter and for him, it didn’t happen. Tom, who was born in London, is an Arsenal fan but his girlfriend supports Liverpool and he was dragged out to the celebrations two nights in a row.

For Tom, it was Rival Sons and it was Liam Gallagher for Jay.

Greta Van Fleet: worth the hype?

For Jay, child trafficking is something he believes much more should be done to combat and Tom recently went on a demonstration against the war in Yemen and to highlight the suffering of people there.

For Jay, it’s an album by Biggie Smalls and its Eliza Doolittle for Tom.

The new single is out on 21 August. We are back in the recording studio in September to lay down another couple of songs which we will release as singles later this year and then bring those together with BANG and BURN to create an EP for release at the end of the year. As there are no gigs we will continue to release made at home videos of covers. We are due to open the rescheduled and revised Hard Rock Hell ABC festival in November and have just been offered a headline slot in Liverpool for December.

It’s essential to keep feeding the beast that is social media. To find out what we are up to just visit: