English five-piece rock band Kiss The Gun is set to release their latest album ‘We See You’ on September 4th, we caught up with lead guitarist Gerry Hearn to discuss the background of the band, as well as what fans can expect from the new album. 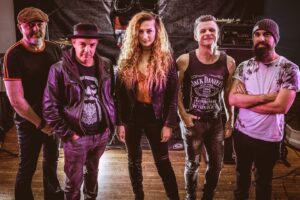 The band formed in 2016. They originally did an EP and then were offered a record deal the following year. That’s when Nadin Zaqaryan, Rob Taylor, and myself came on board to record the first album, Nightmares. Nadin left the band in 2018 due to visa issues as she lived in Georgia (the country, not the US state!) and that’s when our current singer, Abi Austin, came on board to record this album.

I would describe our sound as hard rock with a big emphasis on melody. We definitely have a knack of writing songs that are catchy. At the same time, we always try to be a bit different.

The second album ‘We See You’ is due 4th September, what was the gestation period of the album like? I believe that it was recorded, mixed, and mastered in just 8 days?!

Dave South (bass and keyboard player) and I had been writing material for around 18 months after the first album came out. There were something like 14 songs written for the album and we managed to whittle it down to 9. We worked pretty hard in pre-production and Abi contributed to two of the tracks on the record. We booked the studio, we went in and everything apart from the vocals and the lead guitar overdubs – everything was done live, just five people in a room, and I think this comes across on the record. 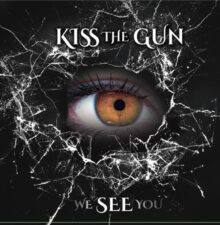 ‘What We’ve Become’ was the debut single from the new album, what was it about this one that made you chose it as the first chance fans had to hear new music?

We thought it was something very different. There is something about that song that is hard to put into words. When I sent the demo of the song to the band, everyone instantly liked it. I wrote it very easily and I usually write songs as guitar instrumental with the melody, and then by the time my partner had added the lyrics, that was that, and the band went, that’s the single!

The title ‘What We’ve Become’ can be looked at a few ways; from a personal point of view from someone in a toxic relationship, or even from a worldly point of view. Have Kiss The Gun done a Simpsons and predicted the future before 2020 went to shit?!

Yeah – all of that! When the track was written, it was originally about Brexit! But so much of the world right now is endless cycles of destruction – from relationships to the world stage. It means whatever you want it to mean. As for the riff and the musical arrangement, I haven’t got a clue where it came from. It was one of those that just fell out the sky,

What was the first studio playback like, the first time you heard the album start to finish?

We wanted a darker sound on this album, and when we listened to the playback, we were taken aback how raw and fat it all sounded! In fact, it actually ended up sounding better than we thought it was going to, considering the amount of time it took us to record, mix, and master everything.

In what ways has the band developed since the debut album ‘Nightmares’ in 2017?

Well, we’ve got a different sound now, because where we now have a different vocalist, we’ve found another angle. I think although we’ve always been a rock band, this album has definitely got a harder edge, whilst keeping the melodic hooks that are our trademark sound.

To me, it doesn’t matter how technically brilliant musicians in a band are. It’s all about the hooks; it’s all about the song. You have to have the hooks to be able to draw people in – so anybody out there who’s starting out, make sure you’ve got a good riff and strong choruses, and remember, the song always comes first.

It’s hard to find a band that is very similar to what we do. We’ve been lucky enough to work with bands such as UFO, the Feeling, etc, so our music crosses the board. We’re not heavy metal; we’re not pop; we’re not rock, and we’re certainly not hip-hop! We’d love to open for any band from Journey, to Alter Bridge, to Deep Purple if they’d have us! 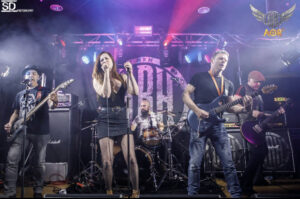 I was in my mum’s front room in early 1982; she put on Deep Purple’s Machine Head on vinyl. I remember the track I found out to be Highway Star came on and I didn’t take much notice of it at first, and the Ritchie Blackmore’s guitar solo came on. I remember saying out loud, ‘What is that?!’ I listened to that solo all the way through because it was completely different from anything I’d ever heard before, and that’s when I said, I wanna do that!

I saw Toto at the Royal Albert Hall. It was an amazing show! Steve Lukather is one of my heroes.

What current issues are you particularly passionate about?

As a musician, I feel passionate about the state of the music industry today. It is so sad to see live venues closing, bands not being paid for their work, and musicians being ripped off all the time. Nowadays it is shocking that in some places, bands are even having to pay to play!

I don’t use Spotify – I’m old school with CDs and vinyl! I have a Level 42 album. Although it’s not the usual thing I listen to, it’s great musicianship and great songs!

Get through it and stay alive!