Syracuse-based Punk-trio Keep Up are keeping busy during the pandemic by continually creating new music and releasing killer videos, the latest of which is ‘Cigarette Lips’ (check it out above). Band-members DJ, Ian, and Chris went over and above the call of duty in filling in the blanks on our introduction to Keep Up, check out their answers below, and don’t forget to take advantage of their generous offer of 15% off an online purchase from their store. 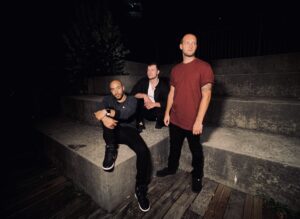 (DJ) Keep Up has been a band for just under 3 years now. We are from the central area of New York in the United States. The band originated around the idea of “fun” and not taking the scene so seriously. We understand the art of professionalism, but continuously use humor as a theme. Keep Up often turns into a way of living for us. It seems like the world is moving so fast and if you don’t ‘Keep Up’ you’ll get scooped up in the digital void of doom.

(Ian) My first gig ever? That was 2013 in Lacona, NY over 400 people. I was nervous, but stoked to follow my dream of becoming an all-time performer. This gig was with my high school band “Beneath the Surface”. We played about 10 songs and I was so excited to be in that moment, no matter what we sounded like.

(Chris) First show was at the Wescott Community Center with Shores To Armageddon. Sick name, I know. I think we played 3 or 4 songs but I have no idea who we opened for. It was a hardcore show in 2013. My second gig was at the North Syracuse community center. My band at the time played with DJ’s band, Nasty Habit.

(DJ) Our listeners should be expecting new music! Our viewer should expect new videos! We just released a new EP — Win Some, Lose None — and did a total makeover for this release. We love getting our hands dirty and digging into new parts of being musicians and artists.

(Chris) It’s obvious to me that all the music in the Syracuse area is great. Clearly having to Sammys Awards can attest to that. There are so many great artists, producers, and musicians around that it’s easy to help each other be better. I think having something unique is the best way to stand out. Like for us for example, we can switch instruments mid-song when we play LIVE. This skill is very useful when it comes to recording in the studio. Having 3 drummers, 3 guitar players, and 3 bass players, it makes it easy to get creative with only the 3 of us. That’s definitely an attribute that stands out in the local scene here.

What are you working on at the moment that people can check out?
(Ian) We have an exclusive music video release for one of the songs of our latest release. The official music video for “Cigarette Lips” can be viewed at rocknloadmag.com with more content and reviews. This video was filmed and edited by @JPG_Jack (Instagram). We think he did a fantastic job! 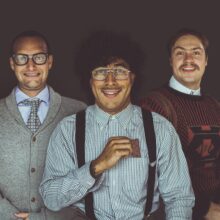 What bands out there do you feel are best suited for you to open for?

(DJ) Right at this moment, we would be best suited to open up for a couple of upcoming bands. Bands like Royal Blood, Neck Deep, and Seaway are all viable options. These are bands that have continued to release music even though it seems that the world has shut down the entertainment business.

(DJ) That’s a great question. Seems like Machine Gun Kelly has totally flipped the script and gone pop-punk. For us, that’s our ‘bread and butter’. He seems to have come up with a fantastic rough element that is catchy and attractive. He would also be a fantastic artist to open up for.

(Chris) My parents love classic rock so I grew up listening to Pink Floyd, Led Zeppelin, and Van Halen. Seeing what they’ve done for music in general and being in love with the songs that they’ve written was my ‘aha’ moment. They bought me my first guitar when I was 13 and I played the sh** out of it.

(DJ) The last gig I attended was a socially distant cover band show at a venue called Sharkeys. The band was called Hard Promises based out of Syracuse NY. They played an outdoor venue set up with tables, drinks, and loud music. It was great as the sun went down. They played all the right cover songs for the 80’s kid in me — If I was alive in the ’80s.

(Ian) The new EP has a song called “Preachers Daughter” on it. This song was written about a fictional thought of dating a preacher’s daughter. It’s cheeky and bubbly, but still has a hint of the Keep Up sound. You can find this song on Spotify now

(Chris) With a new EP release — Win Some, Lose None — We plan to drop a few more music videos to follow. The new tunes we’ve written are some of our greatest works of art and hope that it can help shed some light on the rest of 2020.

How active are you on social media and where can people connect with you?
(DJ) We are very active on social media. We are always posting and connecting virtually with our fans. You can find all of our professional promo on our website and Facebook. You can also find us fooling around on our Snapchat @Keepup_official! Click the links below:
Keepuporshutup.com
Facebook.com/keepuporshutup
Twitter.com/keepupofficial
Instagram.com/keep_up_official
Keepuporshutup.bandcamp.com

If you’re reading this, thank you! We appreciate all the music lovers who actively care about original music. Please give Keep Up a listen, a follow and share our new tunes if you love what you hear. On top of that, we’d love to offer you an exclusive discount code, enter “DevilsGate15” at https://keepuporshutup.com/shop to get 15% off your next online purchase.