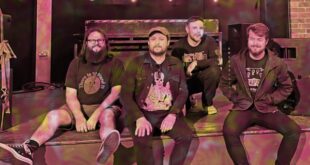 Columbus are a punk trio from Queensland, Australia. Although they may be new to many, they stole the show, as far as our Kirsten was concerned, at the Unify Gathering. Their music is tight, angry, happy, energetic, and full on.

The bands first release was in 2013 which was, ‘Sad Songs And Sing Alongs’, which managed to bang out seven songs in about seventeen minutes. The follow up in 2014 was a split EP with Perth band Alex The Kid which saw three songs totalling about six minutes. In 2015, we got a far more mature sound in, ‘Home Remedy’ which gave us a whole twelve minutes of new joy. The band was voted by Blunt readers as having the best EP of 2015, and being the best newcomer. If there was an award for being too fucking cool, then they would probably win that as well. At Unify, this band strolled on at lunchtime, Day Two, and smashed it out the park. Craig’s ‘Pick Of The Day’ for us, and that is saying something given the line up at Gippsland. Have no doubt that you will be seeing this band in your neck of the woods sometime soon. Get out and mosh!