Introducing: Ali In The Jungle

Ali In The Jungle have been swapping instruments and jumpers in front of live audiences since 2013. People enjoy trying to pin down their genre-hopping sound, which ranges from indie and piano-pop, to jazzy ballads and art-rock. Their debut music video “I Don’t Even Know You!” has just been released so here is an introduction to the Milton Keynes-based outfit known as Ali In The Jungle. 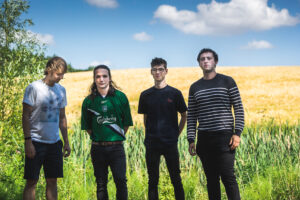 AITJ: It’s getting on for eight years now! The four of us used to go to the same youth group – Tim and Sam were already childhood friends, as were Chris and Ali. Ali was the oldest, and cooler than the rest of us, so we named the band after him to entice him into joining. It’s a good job he did, otherwise the band name would’ve made even less sense!

AITJ: Our first gig was at an open mic night at one of the many local pubs in Newport Pagnell (immortalised by Morrissey leaving his bag there). This was around seven years ago so the memory of it is a bit hazy – we’ve played there loads of times since which doesn’t help – but I remember being very nervous. Everyone who’d come to watch us said it was great, and everyone who’d come to drink ignored the music entirely, which was probably for the best because that way all the feedback we got was glowing!

AITJ: Expect the unexpected! We like to think that first-time listeners get a sense of never having heard something quite like that before – I hope that’s not too much to expect of ourselves. We’ve been described as ‘posh punk’/’posh rock’, probably because of the piano. It’s a fun term, but we incorporate such a diverse range of genres into our music, as well as tempo changes, many different sections, and differing playing styles that I think it’s too difficult to nail it down with one or two words. I like to say ‘innovative indie, with a sprinkling of basically every other genre’. Have a listen and let us know what you’d call it!

AITJ: If you want the name that you’re building to stand out, you have to make it 3D and pile loads of stuff up so it can be seen for miles. Practise with LEGO, and then when you feel you’re ready, get yourself some mortar and one of those trowel thingies and get stuck in.

[Serious answer] You need at least one thing about you which is completely unique – whether it’s your frontman/woman’s singing voice or onstage antics, or your dress sense, or the fact that you play trumpet and harmonica at the same time, or your chosen mode of releasing music (eg, exclusively on cassette). The rest of your band’s identity should probably fit more or less into one kind of category so that new listeners can quickly get a handle on what you do (it’s pretty easy to spot an indie band, for example). 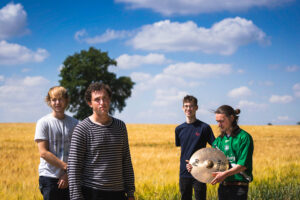 AITJ: We’ve just released our debut music video for “I Don’t Even Know You!” You can watch it over on our YouTube channel

While you’re there you can have a gander at the lyric video for “Drunk Generation” which we made in lockdown and we’re rather proud of. We’re also working on a top secret project for the BBC (yes, the BBC!) which we can’t tell you too much about – but keep an eye on our social media in the not-too-distant future

AITJ: Everything Everything. Their music is cerebral and intricate and just plain weird at times, all of which AITJ are occasionally guilty of. Plus we would very much like to go to a free EE concert please, and opening for them would be a good way to achieve that.

AITJ: BAXTR, an all female dreamspace power pop trio. They only released their first single recently, but it’s almost unreasonably great, and it looks like they’ve got another on the way. Plus they’ve got the look, and the right manner of engaging with people on social media – it shouldn’t be important but it is! Keep an eye out for them.

AITJ: I remember absolutely loving the theme tunes to a couple of audiobooks we had on repeat in the car when I was little, in the way that only really hyper children can. I never had a ‘lightbulb moment’, but the closest I got was listening to prime noughties pop/rock music on my iPod on the way to school, and really wanting to create music as intricate and powerful as some of those songs.

AITJ: Marika Hackman at the O2 Forum in Kentish Town. That was the third time I’ve seen her, and the performance was great as per. Her band was all dressed in matching boiler suits and nobody seemed to play anything other than a Fender Mustang, the same guitar I’d just bought. It’s mad that we were allowed to go to that gig in March, but I guess I’m glad we did.

AITJ: Kanye West, “Graduation”. He’s a controversial figure for many (correct) reasons, but the man has created some great music over the years.
Rap/hip-hop isn’t usually my cup of tea, but Kanye was my introduction to that world and that album brings back some memories.

AITJ: Release our sophomore music video for “People Change”. It’s pretty much the exact opposite of our first one and I can’t wait for people’s responses to it!
Hopefully we will be able to make the BBC-related announcement before the end of the year. We’ve been writing songs like they’re going out of fashion, so maybe we’ll get time to record another something and release that in 2021 — let’s wait and see.

AITJ: We’re so active that I have to take my FitBit off every time I tweet, otherwise it calls an ambulance. Only joking, I will never own a FitBit (and that’s an AITJ guarantee). Ali In The Jungle are on Facebook, Twitter, and Instagram, and our music is on every major music streaming site (Spotify, Apple Music, YouTube, iTunes, Bandcamp, you name it). We’ve got a website too: https://www.aliinthejungle.co.uk, so come and say hello!

Here are some links to make that easy-peasy squeezy lemon: here.