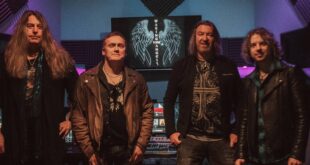 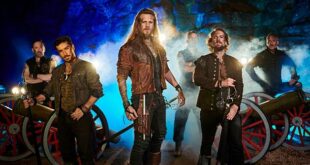 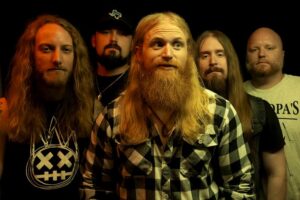 Texan rock & roll outfit Blacktop Mojo is set to unleash their brand new, self-titled album on Friday, August 13th. Vocalist Matt James took some time out from the road to talk us through the album, as well as some of the lyrical subject matter and answers the all-important question of who would win in a three-way fight between Freddy, Jason, and Micheal Myers. Shake & bake, baby…shake & bake.

The new self-titled album is almost upon us, you must be buzzing that it is so close…

We are very excited, man. We have been sitting on it for something like six months now so we are ready to roll it out.

When Lamb of God released their self-titled album last year, frontman Randy Blythe said “…the reason why we called it “Lamb of God” was to make a statement, this is Lamb of God here and now…”, I was curious, is it the same reason with Blacktop Mojo?

Oh yeah, I was about to say…” damn, he stole my answer…”! This is our fourth full-length studio record, and we’ve been a band for almost ten years now, I feel that we have a handle on what our sound is, what we are as a band, and this record is definitely an offering of that. This is who we are. Like Randy said! 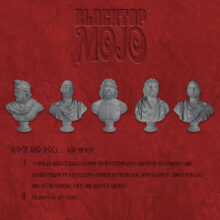 Although the album cover art is really simple, it’s also really striking: who came up with the concept for it?

Thank you, man. I actually did the artwork for it.

Yeah? It is amazing, have you seen it yet on vinyl? I bet it is a knockout…

I haven’t seen it on vinyl yet as the vinyl plants over here are backed up with the pandemic, so it might be just a little while longer until we have them but I can’t wait! I have seen it on CD though and it looks really good on the CD.

You have released two singles from the album already: ‘Tail Lights’ and ‘Wicked Woman’, they are both very different from each other – was that the reason that you chose them as singles?

On the subject of ‘Wicked Woman’, we have to talk about the incredible video that accompanies it, it looked great fun to make…apart from you getting stabbed and turning into a zombie, obviously…

Yeah, that was fun, even getting stabbed was fun! It was cool figuring out how to do that.

There is obviously a big slasher vibe behind the video…

As a fan of slasher movies, who do you think would win if Freddy, Jason, and Michael Myers got into the ring together? 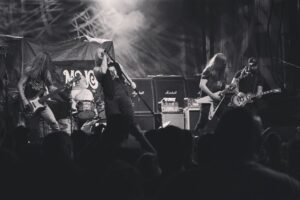 After ‘Wicked Woman’ fades out, one of my personal favorites on the album kicks in – ‘Bed Tundy’, obviously it’s a cool play on words, but what’s the story behind this one?

Basically, just being locked up in the pandemic and watching a lot of serial killer documentaries! A lot of people are fascinated by serial killers, it’s not an uncommon thing, but just seeing all these documentaries on Ted Bundy and how he seemed such a normal person on the outside, while he was an absolute monster behind closed doors…the dichotomy of that is fascinating. We all have dark parts, but hopefully not THAT dark!

There is another song later on; ‘Latex’, is there a concept of darkness running through the album?

I think that’s just the way that it played out. A lot of times when I am writing lyrics, it’s a lot easier for me to write about darker things. For whatever reason, it’s actually harder for me to write love songs…

‘Rewind’, that’s another favorite, that could be a love song? Rewind and go back to a point when it was all good…

Absolutely, it’s about that moment right before you are splitting with somebody and wish you could just pause and rewind to that last good moment.

Classic Rock Magazine has got behind this album release, track of the week, etc – it seems that there is a bit of a push with this one to get Blacktop Mojo more known in the UK?

I think so, yes. I was able to do an interview with Classic Rock a few weeks ago, and hopefully this time around they will do a feature on us. It will be pretty cool if we are in the actual magazine, rather than just online. 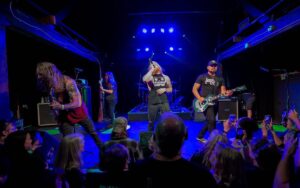 The band is on tour at the moment, how was your first gig back after the lockdown?

It was absolutely incredible, man. It was a huge relief, as well as a huge release, just being able to put that energy out there and feel everybody in the audience having a good time together. We’ve had more people come out to the shows than we’ve ever had, our audience has definitely grown over the pandemic, which is a fortunate thing. You are always nervous – especially when you have been off the road for 18 months – that you are going to come back and there won’t be as many people as last time. But that hasn’t been the case at all, it’s actually grown.

With so much uncertainty involving live music, and further lockdowns, how far ahead can you plan?

There are talks of further lockdowns looming, of shutting things back down, but you just have to go day-by-day and hope that it doesn’t get as bad as last year…which was devastating for everybody, not just those in the live entertainment industry.

What about plans for Blacktop Mojo to play the UK and Europe? Is that a possibility that might happen one day?

Definitely, yes. We are pushing this record in those territories more than we have done in the past, and we are doing that in the hopes that we can travel and play, and back up the album.

The pandemic, and subsequent lockdown, has led to a lot of people seeking out new bands to enjoy. It must be humbling when you get your Spotify audience figures to discover that people all around the world are checking out Blacktop Mojo?

Yeah, man, it’s a weird feeling. We’re from a really small town in Texas, so it’s incredible when we find out that someone on the other side of the world is listening to us. It’s very cool! I use Spotify, I love Spotify. I’m finding new stuff all the time, and that’s super-cool. It is the equivalent of walking into a record store twenty years ago and talking to the guy behind the counter and asking him what’s new, what’s cool. 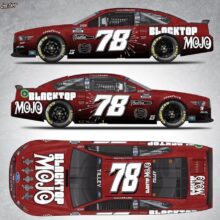 What is cool is Blacktop Mojo having their own branded racecar! Through the wonders of Facebook research/stalking, it seems that Kyle Tilley will race at the Indianapolis Speedway in a Mustang sporting the Blacktop Mojo logo – that is seriously cool!

Oh, it is awesome, man! That totally fell out of the sky, we’ve followed each other on Instagram for the last few years, and he featured some of our music in his stories. He reached out and said…” hey, man, I’m a fan…” and he started racing NASCAR this year, and said that he would love to feature our name on the car and get it out there…and that is such an amazing opportunity for us. You can’t beat it, it’s incredible and I still can’t quite believe it.

Please tell me that in the next video you are going to feature the car with you and Kyle in a “shake & bake” scenario?!…

[Laughs] Yeah! Get a little Ricky Bobby action going on!

Ricky Bobby – still one of the best Will Ferrell characters…ever!

Ending on some more Facebook research/stalking: on the band’s bio it states that you are “5 guys living together and playing Rock and Roll…”, is that still the case, and if so, does that make you guys the hairier, more muscular version of The Monkees?

A few of the guys got married recently and in the last few months have flown the nest. Everyone is gradually moving out, doing adult things, but we all still live very close to each other. I may have to take that bio down now!

All live images via Blacktop Mojo Facebook, credit to the owner.

Previous Ryan Hamilton invites us on a Permanent Holiday
Next THE PICTUREBOOKS: Team up with Elin Larsson (Blues Pills) on New Single