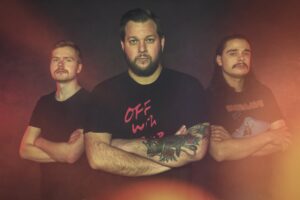 Norwegian stoner-punk trio BOKASSA have just unleashed their latest opus “Molotov Rocktail”, guitarist/vocalist Jørn Kaarstad took some time out from signing vinyl copies of the album to talk to us about all things BOKASSA-related.

The incredible new album “Molotov Rocktail” is set to drop on Friday, what was the gestation period of the album like?

It was a really fun recording process. We were touring Norway when everything got cancelled, and therefore it was great to just start recording in the studio instead. After it was finished it was however quite hard to just sit around and wait without releasing new music, especially since we didn’t have anything else going on. But glad that it’s finally out!

With it being the first new BOKASSA album since 2019’s critically-acclaimed “Crimson Riders”, as well as the debut for Napalm Records, did you find that you had put any additional pressures on yourselves during the recording process?

Not really. I mean our debut album “Divide & Conquer” got us a tour with the world’s biggest metal band when we were an unsigned band, without even a booking agent. So as far as we are concerned this band is an anomaly and we just do what we feel like album-wise. It’s not like we’re gonna suddenly become a big band anyway, so we just make music that we like ourselves without any concern for sales or popularity.

After the opening instrumental intro of ‘Freelude’, the album blasts to life with ‘So Long Idiots!’, followed by the insanely catchy ‘Pitchforks R Us’ and the line that sums up 2021 perfectly…“I love a good witchhunt…”: are both songs a result of the last few years of the shit-show that is the modern world today, or purely coincidental!?

Those songs were written before the pandemic so it has nothing to do with that. But the world has kinda been on a downward spiral for years anyway so I guess it’s more of a general look at the state of things. That being said, if listeners think of the people who tried to buy up all the anti-bac and toilet paper for then to sell it for an outrageous amount of money, when they hear “So Long, Idiots”, that’s fine by me!

‘Pitchforks R Us’ is the leading contender for the standout moment on the album, so much going on during its four minutes; the hooks are massive for starters, really fun, insightful lyrics – how quick did it come together?

That song came together quite quickly actually. There are some songs on the album that have riffs that have been around forever, but Pitchfork kinda just wrote itself. Lyrically I was annoyed with the growing number of people who just seem to be offended for the sake of being offended, and misunderstanding people on purpose just to start something out of nothing, just for the thrill of it. I wouldn’t be surprised if this was a real headline f.ex “Man outraged Tesco didn’t have Ham & Cheese sandwich – had to settle for Tuna in meal deal – Tesco apologies”. 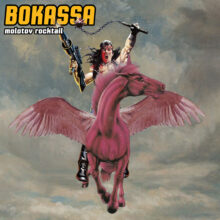 On the subject of recent trends, and trial by social media, who or what would you like to “cancel”, and why? Whoever first came up with Tik Tok challenges (especially the jumping out of a car to mime to Drake’s “In My Feelings”) needs a slap, right?

Haha, I actually had to google what that was. That’s one minute of my life I’m never getting back. I don’t think any of us in the band are on social media much anymore, except the band accounts which we kinda need to, so I’m blissfully unaware of what’s going on on TikTok or whatever challenge is cool or whatever else is cool for that matter.

“Low (And Behold)” is another personal favourite, it packs an almighty punch for sure, was there a brief slice of some horn action in there?! And perhaps “ready, set, fucking go” could be the phrase to live by now that live music is on its way back…

Yes, there are some horns in that one as well! Haha, yeah hopefully! I think people, naturally, are a bit scared to go to concerts still, or maybe people have just grown accustomed to staying home. It’s hard to say without having started to play shows yet, but we are hoping that people will be as excited as we are for live music again.

Is the cowbell the most criminally underused piece of equipment on an album? Does legislation need to be passed to make use of it mandatory?

Yes, it is! I love cowbell. From Blue Oyster Cult to Clutch and Fu Manchu, it always brings that extra spice to a track. Same with vibraslap, a percussive rattlesnake-sounding instrument! More vibraslap in rock I say!

“Molotov Rocktail” ends with the seven-minute epic “Immortal Space Pirate 3 Too Old For This Sith”; will there be a fourth installment of the saga?

At this point, Immortal 3 is the end of the trilogy. But as with all franchises, never say never. Suddenly we’ll release a fourth one many years after, like Indiana Jones and the Crystal Skull or hopefully like the latest Mad Max!

The video for “Burn It All (P.T.S.D.E.A.D.)” features “Sgt. Bananas” (aka BOKASSA bassist Bård Linga) “taking off” his black metal garb long enough to pop on an apron to make dinner for the band – it seems that having a wry sense of humour is important to Bokassa?

Olav [Olav Dowkes, BOKASSA drummer] once said that this band was all about trying to make each other laugh. And that is a keen observation from Ol’ Dowkes.

Have to admit it, but the album sleeve is probably the best of the year so far! Old-school metal sleeve-meets Conan with a rocket launcher-riding a winged horse! What’s not to love! Who came up with the concept and created the art? And have you seen the gorgeous pink vinyl in the flesh yet?

It was already an art piece by an artist named Moon Patrol, and when I saw it I knew we had to get it for the album! Have not seen the pink one yet, but we were at a signing of orders from Norwegian record store Platekompaniet today and got to see the Gold and Cream White variants, and they were amazing. What was really great was that we were expecting to sign maybe 15-20 pre-orders but we were wrong and had to sign ’em all!

Looking at the quality of the vinyl, as well as the digipak CD, it seems important that the band has a strong presence in the physical product market? A lot of love went into that sleeve…

Yeah, I love colour variations on vinyl records. So the fact that “Molotov Rocktail” is available in pink, gold, black, white, yellow and transparent violet is just fantastic. As a collector myself, I enjoy it! It’s also, at least in my mind, important that the sleeve and everything look great. And this time I think we really got that!

You must be sick of being asked about the Metallica connection, but what did you personally take from the whole experience of opening up stadiums for them?

I just thought it was a fantastic dream, or maybe not a dream, cause we never dreamed that big, haha. But it was just this amazing opportunity that most likely won’t happen again so I just enjoyed it while it lasted!

Gods of COVID willing, BOKASSA will bless the UK and Irish shores soon for eight live dates where Welsh dragons Florence Black will open the shows; apart from copious amounts of alcohol, what can anyone savvy enough to buy a ticket expect on the night?

Two bands that are fired up to finally play again. Lots of fake British accents from us and maybe we’ll learn some Welsh phrases from them as well?